The Germans launched the first & second battles of Ypres in 1914 and 1915 respectively. In 1917 it was the allies who launched the third Ypres battle, Douglas Haig intended this to be a breakthrough in Flanders

Haig had been thinking over for a while about the idea of launching a major offensive in Flanders. It was his preferred choice for 1916, although in the event the Battle of the Somme took precedence that summer.

Meticulously planned, the third battle of Ypres was launched on 31 July 1917 and continued until the fall of Passchendaele village on 6 November. The offensive resulted in gains for the Allies but was by no means the breakthrough Haig intended, and all gains that were made came at great cost in human terms. 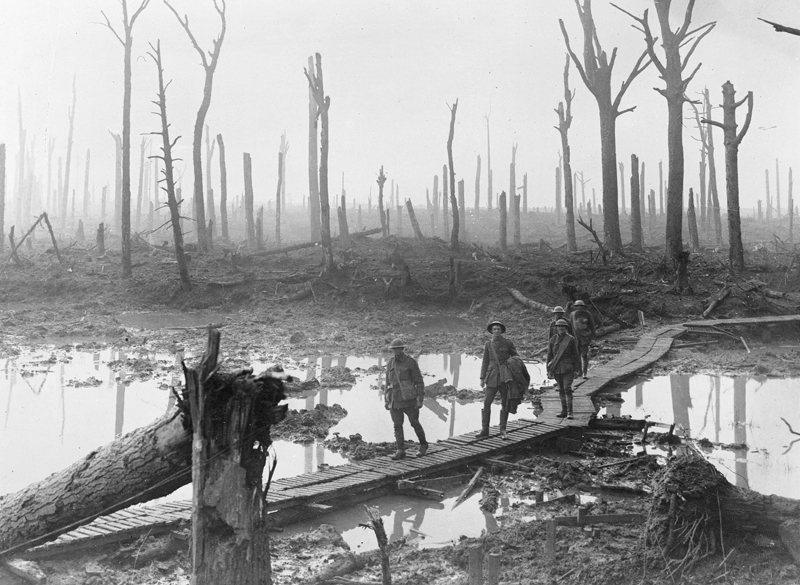 Commonly referred to as Passchendaele, the tactics employed at the Third Battle of Ypres are as controversial as those executed at the Battle of the Somme a little over a year earlier, and was the final great battle of attrition of the war.

After the disastrous failure of the French Nivelle Offensive which had ended in May, with mutiny spreading throughout the French army, Haig was determined to move forward with the plans for a major British offensive in late summer.

Haig, whilst recognizing the urgency of this requirement, was at least as interested in finally breaking the will of the German army, which he believed was near to collapse - a faulty view that he similarly held at the height of the Somme offensive a year earlier.

British Prime Minister David Lloyd George was opposed to the Passchendaele offensive, and later came out highly critical of Haig's strategy and tactics in his published memoirs, but in the absence of a credible alternative to Haig he felt obliged to sanction Haig's plans. He was however encouraged by arguably the greatest local success of the war earlier that summer, on 7 June, at Messines Ridge, when the Battle of Messines resulted in the complete capture of the Messines-Wytschaete ridge under General Plumer. The capture of the ridge was a necessary precursor to an offensive aimed at capturing Passchendaele ridge.

Plumer advocated continuing the attack immediately into Passchendaele ridge, arguing that the morale of the German troops was, for the present at least, broken, and that this combined with a shortage of forces would virtually guarantee Allied capture of the ridge. Haig however disagreed, choosing not to bring forward his plans from the end of July.

With the patent instability of Russian forces in the field, and the possibility of a Russian withdrawal from the war, action certainly appeared to be mandated in the summer of 1917. Were the Russians to leave the war it would enable Germany to draft its Eastern forces into the battle on the Western Front, dramatically increasing German reserve strength.

The Third Battle of Ypres was opened by Sir Hubert Gough's Fifth Army, with 1 Corps of Sir Herbert Plumer's Second Army joining on its right and a corps of the French First Amy led by Anthoine to its left: a total of twelve divisions.

As was the norm for any major Allied offensive, on 18 July a heavy preliminary artillery bombardment was effected for the ten days prior to the launch of the attack at 03:50 on 31 July. The bombardment made use of 3,000 guns which expended four and a quarter million shells. Given such an onslaught the German Fourth Army, led by Arnim, fully expected an imminent offensive: the element of surprise was entirely absent.

Thus when the attack was launched across an 18 kilometer front, Fourth Army was in place to hold off the main British advance around the Menin Road, and restricted the Allies to fairly small gains to the left of the line around Pilckem Ridge. Similarly, the French were halted further north by the German Fifth Army under Gallwitz.

British attempts to renew the offensive over the course of the next few days were severely hampered by the onset of heavy rains, the heaviest in 30 years, which churned the Flanders lowland soil into a thick muddy swamp. Tanks found themselves immobile, stuck fast in the mud. Similarly, the infantry found their mobility severely limited. Ironically the very force of the preliminary bombardment had itself destroyed drainage systems, exacerbating the problem. In addition, the artillery shells that had rained down in the days prior to the attack's launch had peppered the very ground that needed to be traversed by the advancing Allied forces.

As a consequence no renewed major offensive could be contemplated until 16 August, when the Battle of Langemarck saw four days of fierce fighting which resulted in small gains for the British, but heavy casualties.

Dissatisfied with progress the British Commander-in-Chief, Haig, replaced Sir Hubert Gough (by moving him and his forces further north) with Herbert Plumer. Whereas Gough favoured sweeping aggression, Plumer planned a series of small gains rather than an all-out breakthrough. The attacks began afresh on 20 September with the Battle of the Menin Road Bridge. This was followed by the Battle of Polygon Wood on 26 September and the Battle of Broodseinde on 4 October. Taken together these established British possession of the ridge east of Ypres. 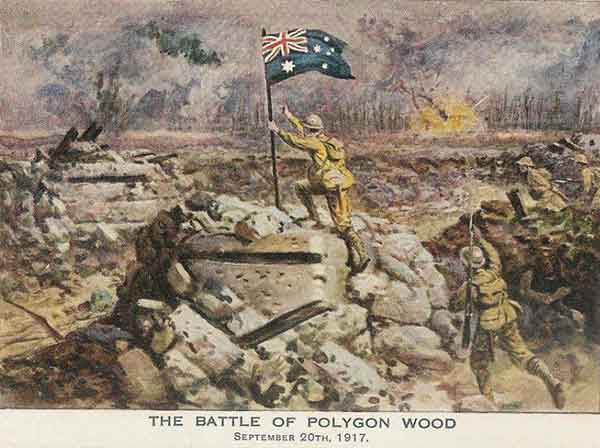 Encouraged by Plumer's small gains - while constantly pushing him to do more - Haig decided to continue the offensive towards Passchendaele Ridge some ten kilometers from Ypres, by now certain that the German army was approaching collapse. Little progress towards this end was made at the Battle of Poelcappelle and the First Battle of Passchendaele, on 9 October and 12 October respectively.

The Allied attackers were themselves nearing exhaustion as German reserves released from the Eastern Front were poured into the ridge. To aid in their defense the Germans made full use of mustard gas (as opposed to chlorine gas in The Second Battle of Ypres), which resulted in chemical burns.

Unwilling to concede the failure of the breakthrough, Haig pressed on with a further three assaults on the ridge in late October. The eventual capture of Passchendaele village by British and Canadian forces on 6 November finally gave Haig an excuse to call off the offensive claiming success.

The Third Battle of Ypres was, like its predecessors, a costly exercise. The British Expeditionary Force (BEF) incurred some 310,000 casualties, with a similar, lower, number of German casualties: 260,000. The salient had been re-widened by several kilometers.

Haig came under intense criticism both in 1917, and since, for persisting with the offensive after it became clear that a breakthrough was unlikely. Critics have argued that the main launch pad for the attack should have been sited at Messines Ridge, captured by Plumer in June; but Haig's original plans precluded this, viewing the capture of the ridge as a necessary diversion, and he declined to modify his plans: evidence, some say, of an inflexible strategy.

However, numerous factors are cited to support the decision taken to continue the offensive into the autumn. With the Russian withdrawal from the war, British vulnerability to submarine attacks launched from the Belgian coast, and weakened French morale which manifested itself in widespread mutiny, it seemed clear that a decisive strike must be attempted before the Allied war effort collapsed.

It is further argued that the disastrous turn in the climate could not have been predicted: that the rainfall was by far the heaviest for many years. Indeed, fighting had taken place around Ypres since 1914 without the kind of problems experienced during Third Ypres.

Haig himself argued that when regarded as a battle of attrition, the German forces could less afford the loss of men than the Allies, who by this time were being supplemented by the entry into the war of the U.S. This view is shared by a number of German contemporaries.

Needless to say, the controversy continues today; however most historians continue to question Haig's decision not to call off the offensive earlier than November, when at least a number of the core objectives had been attained, and it became clear that the French forces would remain in the field.