British Expeditionary Force commander-in-chief Sir Douglas Haig remained determined to break through the German lines at the Somme, leading to yet another bloody offensive in late September – actually two linked attacks at Morval and Thiepval Ridge. 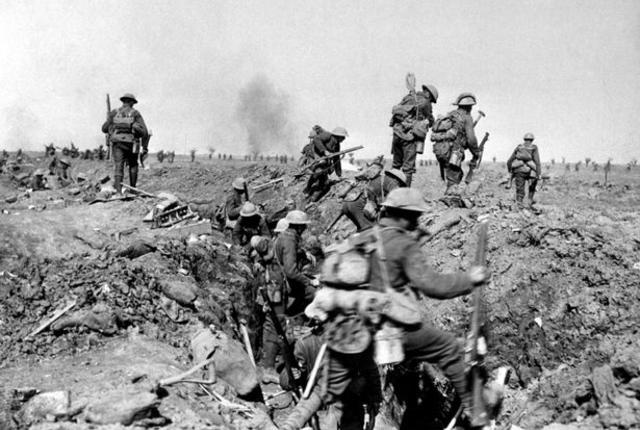 The first phase of the tandem assault was the Battle of Morval, from September 25-28, 1916, when the British Fourth Army attacked German defenders entrenched around the villages of Morval and Lesbouefs east of Flers, which like dozens of other places across the Somme battlefield would soon be villages in name only.

The attack at Morval wasn’t intended to deliver the breakthrough blow but merely to even up the lines by capturing objectives left unattained during the Battle of Flers-Courcelette, as well as tie down German forces in preparation for the main attack by the Reserve Army (later Fifth Army), set to begin the following day at Thiepval Ridge, about seven miles to the west. Thus Fourth Army commander Henry Rawlinson set relatively modest goals, including capturing the German first-line trenches and the villages named above. To the south, the French Sixth Army under General Emile Fayolle would make a simultaneous attack on German positions around the villages of Sailly and Combles.

Because the objectives were limited, British gunners were able to concentrate most of their fire on the German front-line trench and artillery positions, aided by close aerial observation by the Royal Flying Corps’ airborne spotters. For their part the German defenders, forced back repeatedly by successive Allied assaults, still hadn’t had a chance to build the sort of impressive dugouts that sheltered their troops from British artillery fire on July 1, the beginning of the Battle of the Somme.

The furious bombardment unleashed by the British on the evening of September 24 tore up the German trenches, clearing the way for an advance by British infantry and tanks beginning at 12:35 p.m. on September 25 (this time, instead of trying to deploy the tanks in the front ranks of the assault troops as they had at Flers-Courcelette, the armored vehicles were assigned a support role, moving up with the second wave and focusing on German strongholds still holding out after the initial attack; below, British troops in reserve trenches).

Aided by a creeping artillery barrage scouring the battlefield in front of them, attackers from the Guards, 5th, 6th, and 56th Divisions surged forwards in the face of heavy machine gun fire to seize Morval and Lesbouefs; although the Allies failed to capture Combles in the initial assault, their advance elsewhere left the Germans clinging to a long, narrow salient, an untenable position from which they voluntarily withdrew to safer positions on September 26 (below, a British soldier escorts a German prisoner). 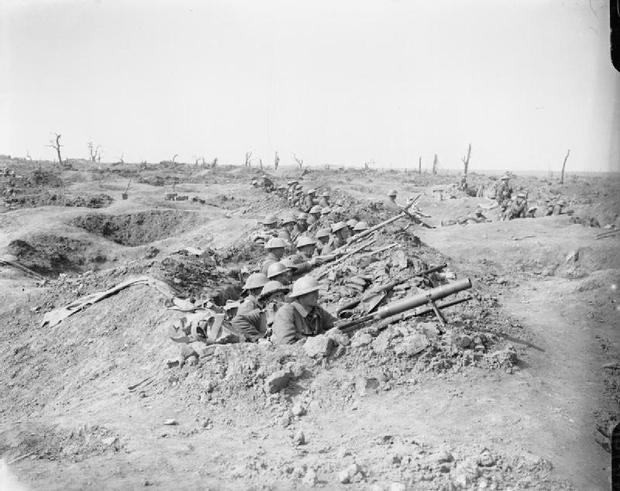 That same morning the British Reserve Army under General Hubert Gough launched the main attack in the Battle of Thiepval Ridge, which lasted from September 26-28, 1916. With fresh divisions coming into the line, Haig and Gough sought to deliver a knockout blow to the German Second Army, which they believed was demoralized and near collapse. The contest would naturally focus on Thiepval Ridge, a strong defensive position occupied by the Germans north of the village of the same name, including several formidable strongpoints, the “Schwaben Redoubt,” “Stuff Redoubt,” and “Zollern Redoubt.” After the capture of the ridge, the British generals imagined another attack around Beaumont-Hamel, bringing them one step closer to achieving the original objectives of the Somme offensive.

Following a thunderous three-day bombardment beginning September 23, shortly after noon on September 26 on the Reserve Army’s right two British and two Canadian divisions poured from their trenches near Courcelette towards the German lines including Zollern Redoubt and another heavily fortified position at Mouquet Farm, from which the German defenders laid down withering machine gun fire. The attackers were left further exposed when two tanks, assigned to help take the strong points, ended up trapped in shell craters instead.

In the center the British 18th Division met with more success in its attack on the village of Thiepval itself, although they were still subjected to devastating machine gun fire from the ruins of the village and the Schwaben Redoubt on the ridge behind it, as Australian Lieutenant
Adrian Consett Stephen recalled:

Sometimes a wave of men would dip and disappear into a trench only to emerge on the other side in perfect line again. Now they are into Thiepval! No, the line suddenly telescopes into a bunch and the bunch scurries to right or left, trying to evade a machine-gun in front, and then with a plunge the first wave, broken now into little groups, vanished amidst the ruined houses. 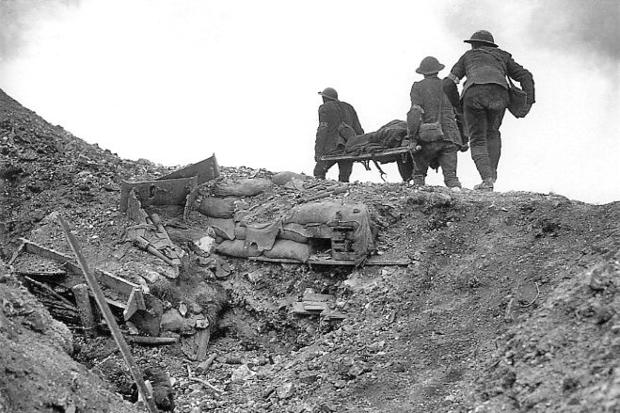 Like their peers on the right British troops in the center had high hopes for tanks in the assault on Thiepval, but once again the experimental weapons often failed to live up to these expectations. Stephen recalled one distinctly uninspiring performance: “At this stage a tank crawled on to the scene can crept laboriously, like a great slug, towards Thiepval. It disappeared among the ruins, puffing smoke. Subsequently it caught fire.”

Nonetheless the British forged ahead, aided by continuous shelling, to capture Thiepval village and the neighboring Thiepval Chateau by the end of the day – but that night found themselves on the receiving end of a blistering counter-bombardment by German artillery, which precisely targeted the former German trenches. With the arrival of relief troops overnight the British returned to the attack the next morning, and finally penetrated the fortress-like Schwaben Redoubt on September 28 – but another week of savage fighting would be required before the redoubt finally fell under total British control on October 5.