The Battle of Verdun

The Battle of Verdun in 1916 was the longest single battle of World War One. The casualties from Verdun and the impact the battle had on the French Army was a primary reason for the British starting the Battle of the Somme in July 1916 in an effort to take German pressure off of the French at Verdun. The Battle of Verdun started on February 21st 1916 and ended on December 16th in 1916. It was to make General Philippe Pétain a hero in France. 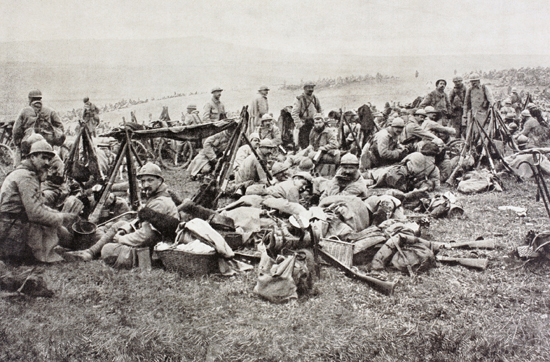 Germans code-named it ‘Judgment’) because of a plan by the German Chief of General Staff, von Falkenhayn. He wanted to “bleed France white" by launching a massive German attack on a narrow stretch of land that had historic sentiment for the French – Verdun. The area around Verdun contained twenty major forts and forty smaller ones that had historically protected the eastern border of France and had been modernized in the early years of the Twentieth Century. Falkenhayn believed that the French simply could not allow these forts to fall as the national humiliation would have been too much. By fighting to the last man, Falkenhayn believed that the French would lose so many men that the battle would change the course of the war.

Falkenhayn’s plan had credibility. The forts were very much part of the French psyche and they would fight ferociously to keep the Germans out of the area. However, Falkenhayn’s plan also had one major weakness – it assumed that the French would be an easy opponent and that it would be the French who would take massive casualties – and not the Germans. In fact, all the forts around the area had been weakened as the French High Command had moved ammunition out of the forts to other areas on the Western Front. Also the trenches dug for defense had not been completed. Senior officers at the fort complex around Verdun complained to Joffre about the state of the defenses in the area. He rejected their complaints.