On October 30, 1918, aboard the British battleship Agamemnon, anchored in the port of Mudros on the Aegean island of Lemnos, representatives of Great Britain and the Ottoman Empire sign an armistice treaty marking the end of Ottoman participation in the First World War. 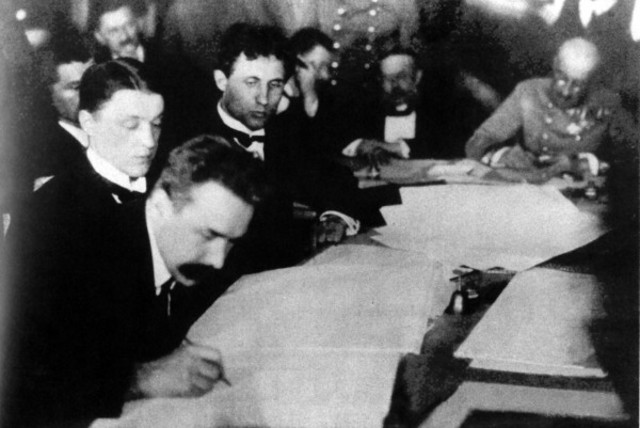 Though the Ottoman Empire—in a period of relative decline since the late 16th century—had initially aimed to stay neutral in World War I, it soon concluded an alliance with Germany and entered the war on the side of the Central Powers in October 1914. The Turks fought fiercely and successfully defended the Gallipoli Peninsula against a massive Allied invasion in 1915-1916, but by 1918 defeat by invading British and Russian forces and an Arab revolt had combined to destroy the Ottoman economy and devastate its land, leaving some six million people dead and millions more starving.

As early as the first week of October 1918, both the Ottoman government and several individual Turkish leaders contacted the Allies to feel out peace possibilities. Britain, whose forces then occupied much of the Ottoman territories, was loath to step aside for its allies, particularly France, which according to an agreement concluded in 1916 would take control of the Syrian coast and much of modern-day Lebanon. In a move that enraged his French counterpart, Georges Clemenceau, Prime Minister David Lloyd George and his cabinet authorized Admiral Arthur Calthorpe, Britain’s naval commander in the Aegean Sea, to negotiate an immediate armistice with Turkey without consulting France. Though Britain alone would engineer the Ottoman exit from the war, the two powerful Allies would continue to grapple over control in the region at the Paris Peace Conference, and for years beyond.

Negotiations between Calthorpe’s team and the delegation from Constantinople, led by the Ottoman Minister of Marine Affairs Rauf Bey, began at 9:30 on the morning of October 30, 1918, aboard the Agamemnon. The Treaty of Mudros, signed that evening, stated that hostilities would end at noon the following day. By its terms, Turkey had to open the Dardanelle and Bosporus straits to Allied warships and its forts to military occupation; it was also to demobilize its army, release all prisoners of war and evacuate its Arab provinces, the majority of which were already under Allied control. Bey and his fellow delegates refused to paint the treaty as an act of surrender for Turkey—later causing disillusionment and anger in Constantinople—but in fact that is what it was. The Treaty of Mudros ended Ottoman participation in World War I and effectively—if not legally—marked the dissolution of a once mighty empire. From its ruins, the victors of the First World War attempted to use the post-war peace negotiations to create a new, more unpredictable entity: the modern Middle East.