Launched in 1905 in Barrow-in-Furness by Louisa, Duchess of Devonshire, HMS Natal was a powerful cruiser of the Duke of Edinburgh class.

In 1911, she had acted as the official escort to the temporary royal yacht carrying King George V and Queen Mary to the Delhi Durbar (a mass assembly at the Coronation Park in Delhi, India) and her ensuing Great War career was relatively peaceful, consisting mostly of patrolling the North Sea and keeping an eye out for the Hun. 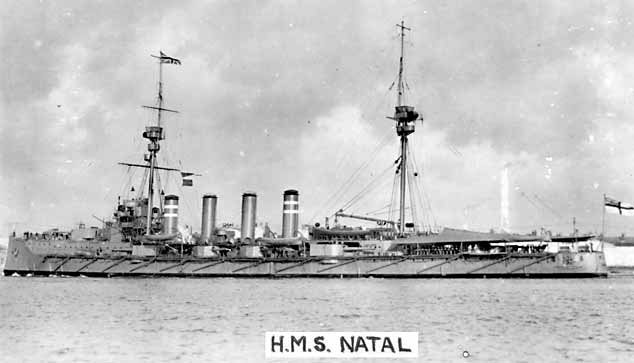 In 1915, she was briefly refitted at Birkenhead and immediately after this was completed she sailed for Scapa Flow in the Orkneys to re-join her squadron – which on the 5th of December steamed south to spend the festive season in the Cromarty Firth.

As part of the festivities, on the afternoon of 30th December, the Natal’s skipper, Eric Black, hosted a Christmas film show on board the warship.

Invited along to join the ship’s company were wives and children of his officers, one civilian friend and his family, and nurses from the nearby hospital ship Drina. Not many were able to accept the invitation; nevertheless, a total of seven women, one civilian male, and three children came on board.

Just as the party was getting under way a series of massive explosions tore the ship apart. Around 421 sailors and guest died.

It is important to bear in mind the number of officers and men who would not have been on board that afternoon (because they were home on Christmas leave) you do wonder how many who were on Natal survived. Transcriptions in Invergordon Naval Museum of original naval signals provide part of the answer.

"5.00 pm – from Drina to Flag – two officers and 43 men admitted and also one dead – request instructions with regard to future movements."

"5.03 pm – from Drina to Flag – three nursing sisters belonging to Drina who were on board Natal are missing…"

The icy waters and darkness of mid-winter will not have helped rescuers. And as the signals were already indicating, the suddenness and completeness of the catastrophe meant that most of the 421 dead were not recovered.

From a naval history perspective, the explosions that destroyed HMS Natal were a terrible omen. Although German sabotage, or a seabed mine, were at first suspected, the subsequent investigation showed that Natal had been destroyed by internal explosions in the aft magazines.

Cordite, the propellant that once hurled British bullets and shells, is notoriously unstable – and in the case of the Natal it was thought that, owing to a deterioration in its condition, or some unknown spark, that December afternoon it spontaneously ignited and utterly destroyed the ship.

Only six months later, during the Battle of Jutland, similar devastating explosions were to completely annihilate three of Admiral Beattie’s battlecruisers and HMS Hood 25 years later in 1941.

There are two small but strange asides to the tragedy of the Natal The first is that in 1912 she sailed to the USA bearing the coffin of Whitelaw Reid the US Ambassador to the Court of St James. After that her crew cheerfully nicknamed her "Sea Hearse".

The second is that "Natal" is in fact the Portuguese for "Christmas" – because the region in South Africa was discovered by the Portuguese navigator, Vasco da Gama, on Christmas Day, 1497.

On that terrible day there was one survivor that was different: it was the ship’s cat, saved by Leading Stoker Thomas Robinson