Marshal Foch was appointed Allied Commander on the Western Front

On April 3, 1918, the Allied Supreme War Council formally confers the post of commander in chief on the Western Front to General Ferdinand Foch. 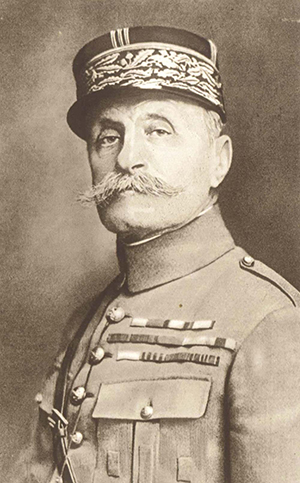 By March 23, 1918, two days after the start of the German army’s great spring offensive near the Somme River and the crucial railway junction at Amiens, France, the Allied mood was black. Paris was being shelled, and there were suggestions that the French government abandon the city. On March 26, French President Raymond Poincare arrived in Douellens to preside over a meeting attended by Douglas Haig and Philippe Petain, the top commanders of the British and French armies; the French prime minister, Georges Clemenceau; Lord Alfred Milner from the British War Cabinet; and Henry Wilson, Britain’s representative on the newly created Supreme War Council.

Unlike Haig, Wilson and Milner both enjoyed the support of British Prime Minister David Lloyd George, and both had become convinced that a united Anglo-French command should be created to strengthen Allied military strategy going forward, especially in the face of the powerful German offensive on the Western Front. Upon arriving in Douellens, Wilson had met privately with his friend Ferdinand Foch, a decorated French commander who had returned from relative obscurity on the Italian front (where he had been banished after the Allied failure on the Somme in 1916) to become the chief of the French general staff. At the subsequent meetings at Douellens on March 26, Wilson and Foch persuaded their political superiors, Milner and Clemenceau, that Foch was the logical choice to head a joint Allied command.

For his part, David Lloyd George defended the decision to name an Allied generalissimo as a matter of necessity. In a statement issued on April 9, the prime minister held that I have always felt that we are losing value and efficiency in the Allied Armies through lack of coordination and concentration. We have sustained many disasters already through that, and we shall encounter more unless this defect in our machinery is put right.