The Lusitania was sunk by a German U-boat

The earlier German attacks on merchant ships off the south coast of Ireland prompted the British Admiralty to warn the Lusitania to avoid the area or take simple evasive action, such as zigzagging to confuse U-boats plotting the vessel’s course. The captain of the Lusitania ignored these recommendations, and at 2:12 p.m. on May 7, in the waters of the Celtic Sea, the 32,000-ton ship was hit by an exploding torpedo on its starboard side. The torpedo blast was followed by a larger explosion, probably of the ship’s boilers. The Lusitania sank within 20 minutes. 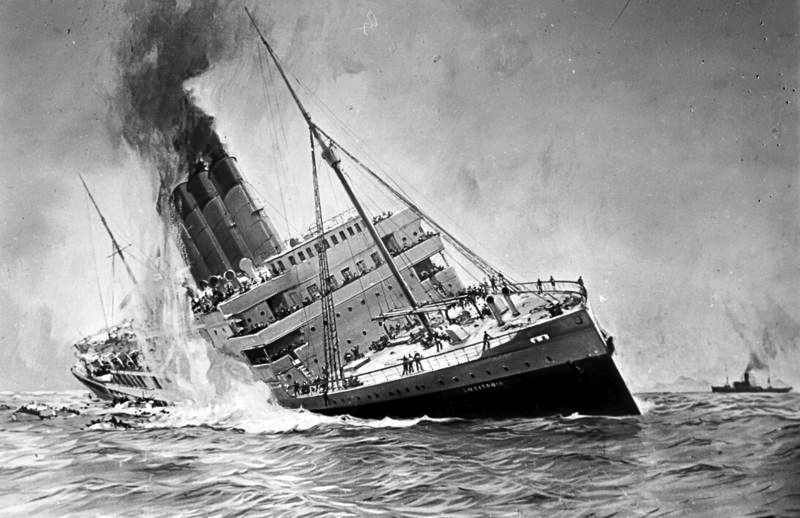 Germany justified the attack by stating, correctly, that the Lusitania was an enemy ship, and that it was carrying munitions. It was primarily a passenger ship, however, and among the 1,201 drowned in the attack were many women and children, including 128 Americans. Colonel Edward House, close associate of U.S. President Woodrow Wilson, was in London for a diplomatic visit when he learned of the Lusitania‘s demise. America has come to the parting of the ways, he wrote in a telegram to Wilson, when she must determine whether she stands for civilized or uncivilized warfare. We can no longer remain neutral spectators.

Wilson subsequently sent a strongly worded note to the German government—the first of three similar communications—demanding that it cease submarine warfare against unarmed merchant ships. Wilson’s actions On the afternoon of May 7, 1915, the British ocean liner Lusitania is torpedoed without warning by a German submarine off the south coast of Ireland.

Faced with the overpowering size and strength of the British Royal Navy at the outset of World War I, Germany realized its most effective weapon at sea was its deadly accurate U-boat submarine. Consequently, in February 1915, the German navy adopted a policy of unrestricted submarine warfare, declaring the area around the British Isles a war zone, in which all merchant ships, including those from neutral countries, would be subject to attack.

Though the United States was officially neutral at this point in the war, Britain was one of the nation’s closest trading partners, and tensions arose immediately over Germany’s new policy. In early May 1915, several New York newspapers published a warning by the German embassy in Washington that Americans traveling on British or Allied ships in war zones did so at their own risk. On the same page, an advertisement announced the imminent sailing of the British cruise liner Lusitania from New York back to Liverpool.
He encouraged his secretary of state, the pacifist William Jennings Bryan, to resign. His successor, Robert Lansing, took quite a different view of the situation: the sinking of the Lusitania had convinced him that the United States could not maintain its neutrality forever, and would eventually be forced to enter the war against Germany.

On the German side, fear of further antagonizing Wilson and his government led Kaiser Wilhelm and Chancellor Theobald von Bethmann Hollweg to issue an apology to the U.S. and enforce a curb on the policy of unrestricted submarine warfare. By early 1917, however, under pressure from military leaders who advocated an aggressive naval policy as an integral component of German strategy in World War I, the government reversed its policy, and on February 1, 1917, Germany resumed its policy of unrestricted U-boat warfare. Two days later, Wilson announced that the U.S. was breaking diplomatic relations with Germany; the same day, the American liner Housatonic was sunk by a German U-boat. The United States formally entered World War I on April 6, 1917.