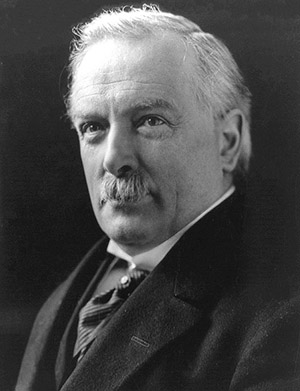 David Lloyd George was born in Manchester on 17 January 1863, son of a schoolmaster. His father died when he was young and his mother took him to Wales to be raised. He became a lifelong Welsh nationalist. He qualified as a solicitor and in 1890 was elected Liberal member of parliament for Caernarvon, a seat he held until 1945. He quickly became known for his radicalism and earned notoriety for his opposition to the Boer War.

In 1905, the prime minister, Sir Henry Campbell-Bannerman, appointed Lloyd George as president of the Board of Trade. In 1908, he was named chancellor of the exchequer in the government of HH Asquith. Lloyd George's 1909 budget has been called the 'people's budget' since it provided for social insurance that was to be partly financed by land and income taxes. The budget was rejected by the House of Lords. This, in turn, led directly to the Parliament Act of 1911 by which the Lords lost their power of veto.

Lloyd George remained chancellor of the exchequer through the early years of World War One. In 1915, he was appointed minister of munitions in Asquith's wartime coalition government. In July 1916, he became secretary of state for war, but was increasingly critical of Asquith. In December 1916, with the support of the Conservative and Labour leaders, he replaced Asquith as prime minister. Lloyd George's achievements in the last two years of the war included persuading the Royal Navy to introduce the convoy system and the unification of the Allied military command under the French general Ferdinand Foch.

At the successful conclusion of the war, Lloyd George was Britain's chief delegate to the Paris Peace Conference that drafted the Versailles Treaty. He remained prime minister, although now dependent on Conservative support. In 1921, he secured the settlement that established the Irish Free State. In the summer of 1922, Lloyd George was involved in a scandal involving the selling of knighthoods and peerages. In October, the Conservatives withdrew from the coalition over their opposition to Britain's foreign policy in Turkey. Lloyd George resigned as prime minister.

He remained in parliament, but was marginalised politically. In 1944, he was made Earl Lloyd George of Dwyfor. He died on 26 March 1945 at Ty Newydd, Llanystumdwy, Wales.