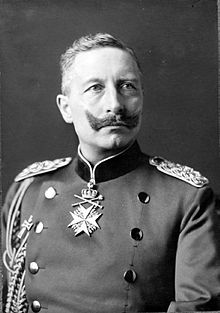 On July 5, 1914, in Berlin, Kaiser Wilhelm II of Germany pledges his country’s unconditional support for whatever action Austria-Hungary chooses to take in its conflict with Serbia, a long-running rivalry thrown into crisis by the assassination, the previous June 28, of Archduke Franz Ferdinand of Austria and his wife by a Serbian nationalist during an official visit to Sarajevo, Bosnia.

Barely a week after Franz Ferdinand’s murder, the Austrian Foreign Ministry sent an envoy, Alexander, Graf von Hoyos, to Berlin. Hoyos carried a memorandum from the office of the Austrian foreign secretary, Leopold Berchtold, expressing the need for action in the tumultuous Balkans region, as well as a personal letter to the same effect from Emperor Franz Josef to Kaiser Wilhelm. Both documents focused on the need for Austria-Hungary to establish an alliance with Bulgaria, in place of Romania—which Germany had previously favored as a possible Balkan ally—due to the latter nation’s increasing closeness with Serbia and its powerful supporter, Russia. Neither the memorandum nor the emperor’s letter specified that Austria-Hungary wanted war, but the memorandum—a new version of an earlier, less emphatic text written before Franz Ferdinand’s assassination—stressed the need for immediate action, pointed to increased Serbian and Russian aggression and stated as an objective the elimination of Serbia as a factor of political power in the Balkans.

Austria’s ambassador to Germany, Ladislaus Szogyeni-Marich, passed Hoyos’ two documents to the kaiser over lunch on July 5, in Potsdam. Wilhelm was outraged by Franz Ferdinand’s murder, and felt a sense of personal loss: the two had met at the archduke’s country estate just two weeks before the assassination to discuss the situation in the Balkans. Though he initially demurred and said he needed to consult the German chancellor, Theobald von Bethmann Hollweg, he eventually—when pressed by the ambassador—responded with uncharacteristic decisiveness, promising Germany’s “faithful support” for Austria-Hungary in whatever action it chose to take towards Serbia, even if Russia intervened. Later that afternoon, Wilhelm assembled a crown council, attended by Bethmann Hollweg, Foreign Secretary Arthur Zimmermann, and War Minister Erich von Falkenhayn, among others. From this meeting, a consensus emerged backing the kaiser’s decision, which Bethmann Hollweg subsequently relayed to the Austrian representatives and Hoyos triumphantly carried back to Vienna.

The kaiser’s pledge, which historians have referred to as the carte blanche or “blank check” assurance, marked a decisive moment in the chain of events leading up to the outbreak of the First World War in Europe during the summer of 1914. Without Germany’s backing, the conflict in the Balkans might have remained localized. With Germany promising to support Austria-Hungary’s punitive actions towards Serbia, even at the cost of war with Russia, whose own powerful allies included France and Great Britain, the possible Balkan War threatened to explode into a general European one.