The German bombardment opened on the evening of 7 April, against the southern part of the Allied line between Armentières and Festubert . The barrage continued until dawn on 9 April. The Sixth Army then attacked with eight divisions. The German assault struck the Portuguese Second Division, which held a front of about 11 kilometres (6.8 mi). The Portuguese division was overrun and withdrew towards Estaires. The British 55th Division, to the south of the Portuguese in a more defensible position, pulled back its northern brigade and held its ground for the rest of the battle, despite attacks from two German reserve divisions. The British 40th Division (to the north of the Portuguese) collapsed under the German attack and fell back to the north. 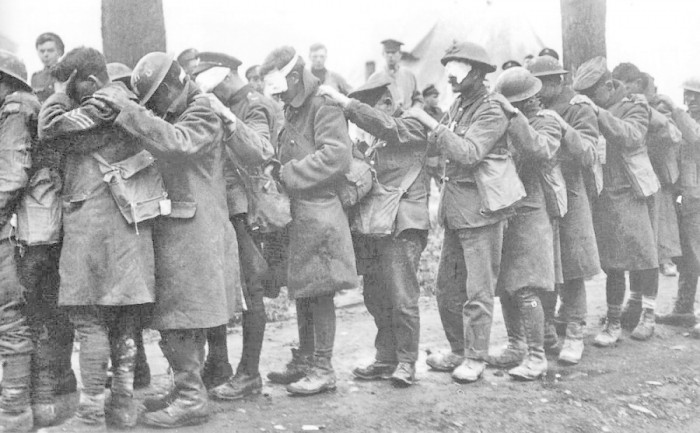 55th (West Lancashire) Division troops blinded by tear gas await treatment at an Advanced Dressing Station near Bethune during the Battle of Estaires.

Horne committed his reserves (First King Edward's Horse and the 11th Cyclist Battalion) to stem the German breakthrough but they too were defeated. The Germans broke through 15 kilometres (9.3 mi) of front and advanced up to 8 kilometres (5.0 mi), the most advanced probe reaching Estaires on the Lys. There they were finally halted by British reserve divisions. On 10 April, the Sixth Army tried to push west from Estaires but was contained for a day; pushing north against the flank of the Second Army, it took Armentières.

Also on 10 April, German Fourth Army attacked north of Armentières with four divisions, against the British 19th Division. The Second Army had sent its reserves south to the First Army and the Germans broke through, advancing up to 3 kilometers (1.9 mi) on a 6 kilometers (3.7 mi) front, and capturing Messines. The 25th Division to the south, flanked on both sides, withdrew about 4 kilometres (2.5 mi). By 11 April, the British situation was desperate; it was on this day that Haig issued his famous backs to the wall order.

On 12 April, the Sixth Army renewed its attack in the south, towards the important supply center of Hazebrouck, another 10 kilometers (6.2 mi) to the west. The Germans advanced some 2–4 kilometers (1.2–2.5 mi) and captured Merville. On 13 April they were stopped by the First Australian Division, which had been transferred to the area. The British Fourth Division defended Hinges Ridge, the Fifth Division held Nieppe Forest and the 33rd Division was also involved. 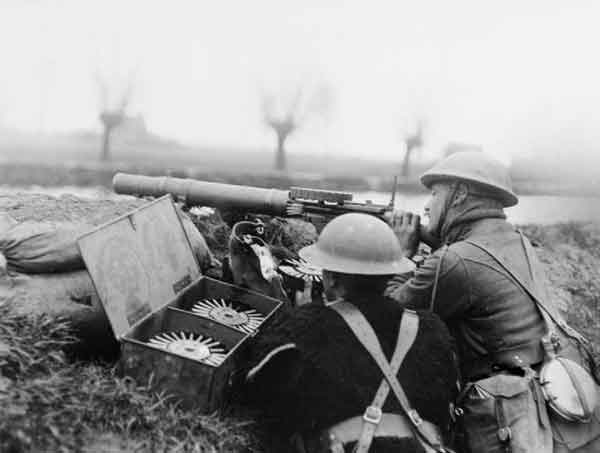 On 23 March, Haig had ordered Plumer to make contingency plans to shorten the line along the Ypres Salient and release troops for the other armies. On 11 April, Plumer authorised a withdrawal of the southern flank of the Second Army and ordered the VIII and II corps in the Passchendaele Salient to retreat the next day into the Battle Zone, behind outposts left in the Forward Zone of the British defensive system. The divisional commanders were ordered that the Forward Zone must be held and that the Germans must not be given the impression that a withdrawal was in progress. At noon on 12 April, the VIII Corps ordered the infantry retirement to begin that night and the 59th Division was withdrawn and transferred south, to be replaced by part of the 41st Division. The II Corps had begun to withdraw its artillery at the same time as VIII Corps on the night of 11/12 April and ordered the 36th and 30th divisions to conform to the VIII Corps withdrawal which were complete by 13 April, without German interference; VIII Corps HQ was transferred to reserve.

During 13 April, General Headquarters (GHQ) discussed the retirements in the Lys valley, which had lengthened the British front line and Plumer agreed to a retirement in the Ypres Salient to the Mt Kemmel, Voormezeele (2.5 mi (4.0 km) south of Ypres), White Château (1 mi (1.6 km) east of Ypres) to Pilckem Ridge defence line but ordered only that artillery ammunition be carried to the rear; the 4th Army reported on 14 April, that the British were still occupying the Passchendaele Salient. The next day was quiet in the salient and the withdrawal of the II Corps and XXII Corps divisions was covered by the outposts in the original front line and artillery, which was divided into some active batteries which fired and a greater number of batteries kept silent, camouflaged and not to fire except in an emergency Plumer gave orders to begin the retirement by occupying the line before the night of 15/16 April, while maintaining the garrisons in the outpost line and holding the Battle Zone with a few troops as an intermediate line. During the night of 15/16 April, the outpost line garrisons were to be withdrawn behind the new front line at 4:00 a.m. and the intermediate line in front of the Battle Zone was to be held as long as possible, to help the troops in the new line to get ready.

On 16 April, patrols went forward during the morning and found the area between the old and new front lines to be empty, the Germans still apparently in ignorance of the retirement; one patrol captured a German officer scouting for observation posts who did not know where the British were. Only in the late afternoon did German troops begin to close up to the new line and the British troops in the Battle Zone easily repulsed the German infantry, the 4th Army diary recorded that patrols discovered the withdrawal at 4;40 a.m. that afternoon. Next day, the Belgian Army defeated an attack from Houthulst Forest (The Battle of Merckem) against the 10th and 3rd Belgian divisions from Langemarck to Lake Blankaart by the 58th, 2nd Naval and the 6th Bavarian divisions, with help from the II Corps artillery. The Germans captured Kippe but were forced out by counter-attacks and the line was restored by nightfall. On the afternoon of 27 April, the south end of the outpost line was driven in when Voormezeele was captured, re-captured and then partly captured by the Germans; another outpost line was set up north-east of the village.