The Germans captured Warsaw from the Russians August 08 1915

The main Battle of Warsaw (Poland) took place in August of 1915. After Germany’s victory at Gorlice-Tarnów in June of 1915, General August von Mackensen led his troops over the San River to capture Przemysl. On June 22nd, the Russian troops left Lvov, the Galician capital. A few days later, the German troops crossed over the Dniester. During the early part of July, Mackensen’s troops were stopped because of attacks by the Russians. 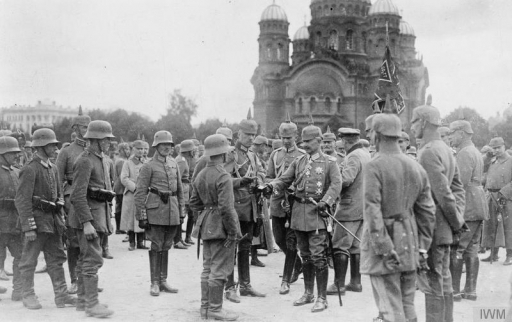 On July 13th, the troops of the Central Powers (armies from the Ottoman Empire, Austro-Hungarian Empire, German Empire, and Bulgaria) started a new offensive that went across the whole front line. About one week later, the German troops had arrived at Narev.

When the Russians saw this, they started to retreat very quickly back to the Ivangorod-Lublin-Chelm line. The Russian troops were vastly outnumbered because of their earlier losses. The Russian Army grew weaker each day as a result of chronic supply shortages which also caused a decline in morale.

During this period, the Russians ordered the civilians to evacuate Poland. This resulted in many hardships for the Polish people. Their evacuations caused problems for the Russian troops too, because the people blocked the roads. On July 22nd, the troops of the Central Powers crossed over the Vistula River.

During this period, the Russians ordered the civilians to evacuate Poland. This resulted in many hardships for the Polish people. Their evacuations caused problems for the Russian troops too, because the people blocked the roads.

On July 22nd, the troops of the Central Powers crossed over the Vistula River.

In early August, Russia’s Fourth Army had abandoned the Ivangorod fortress. Russia’s Grand Duke Nicholas Nikolaevich then made the decision to evacuate his army from Warsaw. On August 5th, the Russians left Warsaw. Germany’s 12th Army (commanded by General von Gallwitz) was able to easily capture Warsaw. On August 21st, Tsar Nicholas II dismissed the Nikolaevich and took charge of the Russian army.

This ended Russia’s control of the city which they had ruled for close to 100 years. Germany’s Twelfth, Tenth, and Eighth Armies continued attacks as they moved south and out of Prussia. The Germans captured Vilna, Grodno, Bialystok, Brest-Litovsk, Ivangorod, and Kovno.

This caused the collapse of the front and sent the northern part of the Russian lines moving south out of Prussia. This resulted in Russia’s northern lines to fall back even further, ultimately to the eastern border areas of Prussia before the war.

During the last part of September, just about all of the Russian troops had been completely pushed out of Galicia and Poland. At this moment in World War I, the struggling Russian Army was no longer considered a threat within the Eastern Front. This freed the German troops so they could focus their attentions on their war efforts at the Western Front.