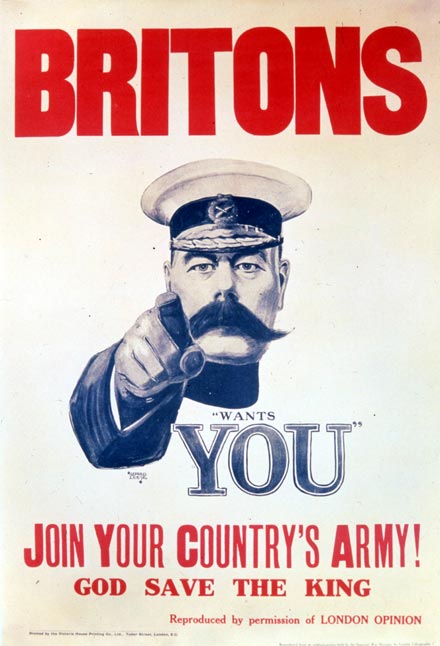 Within a year of Great Britain declaring war on Germany in August 1914, it had become obvious that it was not possible to continue fighting by relying on voluntary recruits.
Lord Kitchener’s campaign – promoted by his famous "Your Country Needs You" poster – had encouraged over one million men to enlist by January 1915. But this was not enough to keep pace with mounting casualties.

The government had no alternative but to increase numbers by conscription – compulsory active service. Parliament was deeply divided but recognized that because of the imminent collapse of the morale of the French army, immediate action was essential.

In March 1916 the Military Service Act was passed. This imposed conscription on all single men aged between 18 and 41, but exempted the medically unfit, clergymen, teachers and certain classes of industrial worker.

Conscientious objectors – men who objected to fighting on moral grounds– were also exempted, and were in most cases given civilian jobs or non-fighting roles at the front.

A second Act passed in May 1916 extended conscription to married men.
Conscription was not applied to Ireland because of the 1916 Easter Rising, although in fact many Irishmen volunteered to fight.

Conscription was not popular and in April 1916 over 200,000 demonstrated against it in Trafalgar Square. Although many men failed to respond to the call-up, in the first year 1.1 million enlisted. In 1918 during the last months of the war, the Military Service (No. 2) Act raised the age limit to 51. Conscription was extended until 1920 to enable the army to deal with continuing trouble spots in the Empire and parts of Europe. During the whole of the war conscription had raised some 2.5 million men.