The Battle of Cambrai, took place in November/December 1917, and proved to be a significant event in the great war. Cambrai was the first battle in which tanks were used en masse In fact, Cambrai saw a mixture of tanks being used, heavy artillery and air power. Mobility, lacking for the previous three years in World War One, suddenly found a place on the battlefield – though it was not to last for the duration of the battle.

Douglas Haig approved a plan to take on the Germans by sweeping round the back of Cambrai and encircling the town. The attack would use a combination of old and new – cavalry, air power, artillery and tanks that would be supported by infantry. Cambrai was an important town as it contained a strategic railhead. In front of it lay the very strong Hindenburg Line – a defensive position in which the Germans put a great deal of trust. The plan included an attack on the Hindenburg Line and the use of three cavalry divisions that would encircle Cambrai, thus cutting it off. While Haig’s plan won the approval of some, others were less than inspired that it included tanks as these new weapons had yet to prove their worth in battle in the eyes of some. 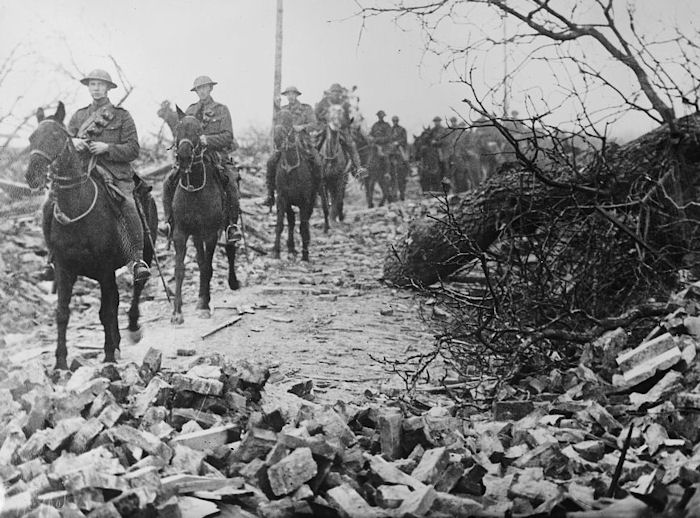 The attack started at 06.20 on November 20th 1917. The Germans were surprised by an intense artillery attack directly on the Hindenburg Line. 350 British tanks advanced across the ground supported by infantry – both were assisted by an artillery rolling barrage that gave them cover from a German counter-attack. The bulk of the initial attack went well. The 62nd Division (West Riding) covered more than five miles in this attack from their starting point. Compared to the gains made at battles like the Somme and Verdun, such a distance was astonishing.

However, not everything had gone to plan. The 2nd Cavalry Division had a problem crossing the vital St. Quentin Canal when a tank went over its main bridge and broke its back – the same bridge that the cavalry were supposed to use to advance to Cambrai! Elsewhere, British units also got bogged down in their attack.
By November 30th, the Germans were ready to counter-attack and defend Cambrai. Many British army units had got themselves isolated and their command structure broke down in places. The German counter-attack was so effective that on December 3rd, Haig gave the order for the British units still near to Cambrai to withdraw “with the least possible delay from the Bourlon Hill-Macoing salient to a more retired and shorter line.” The failure to build on the initial success of the attack was blamed on middle-ranking commanders – some of whom were sacked. The initial phase of the battle did show that mobility was possible in the war but that to sustain it, a decent command structure was needed so that impetus gained in one area of the attack was aided by gains elsewhere in the advance.

While losses did not equate to the Somme or Verdun, the British lost over 44,000 men during the battle while the Germans lost about 45,000 men.