Caporetto marked the first occasion on which the Germans had determined to provide assistance to their Austro-Hungarian allies on the Italian front. Although Cadorna's policy of launching successive breakthrough attacks along the Isonzo was proving highly costly in terms of Italian casualties, it was nevertheless succeeding in dangerously weakening Austro-Hungarian resources.

With the Austro-Hungarian front around Gorizia in danger of collapse (following Cadorna's Eleventh Battle of the Isonzo), the German Third Supreme Command, under Paul von Hindenburg and Erich Ludendorff, accepted the advice of Austro-Hungarian Commander in Chief Arz von Straussenberg to launch a combined operation, intended for September 1917.

Cadorna, who had long feared German intervention at the Isonzo, began to received reports - from deserters and via aerial reconnaissance - of German activity. He therefore called off his own attacks on the Isonzo in mid-September, preferring instead to adopt a defensive posture.

There is little doubt that Cadorna was unaware of the actual strength of the Austro-Hungarian/German forces massing against him. The Austro-Hungarian high command was initially in favour of repeating their 1916 Trentino offensive against the Italians. Overruled however by the Germans, a 25 km line was carefully selected in front of Caporetto, north of Gorizia and along the Isonzo, as the preferred point of attack.

The Third Supreme Command's intention in launching the Caporetto offensive was chiefly to provide the Austro-Hungarian army with the opportunity for recuperation. Hindenburg and Ludendorff assuredly did not anticipate the spectacular success of the actual operation.

Nine Austrian divisions were supplemented by six German divisions (supplied by General von Hutier from Riga) and placed under Otto von Below's command as the Fourteenth Army in October 1917. Although the Italians retained overall numerical supremacy along the Isonzo front (by some 41 divisions to 35), they were notably weaker at the point selected by the German army for the combined offensive.

The Italian cavalry engaged after the rout of Caporetto

The local Italian commander at Caporetto, Capello, was ordered to prepare a defensive line: he chose instead to adopt an aggressive posture, massing his troops for an attack upon the southern flank of von Below's army to the east of Gorizia.

Launched at 2am on 24 October 1917 from a salient at Tolmino and much aided by prevalent misty conditions, the Austro-Hungarian/German attack took the Italians by complete surprise.

Initiated with a heavy artillery barrage of high explosives, gas and smoke, the combined force broke through the Italian Second Army's lines almost immediately. They progressed a remarkable 25 km by the close of the day, adopting infiltration tactics and exploiting breaches in the Italian line with the use of grenades and flamethrowers.

Below's secondary attacks either side of the main offensive were however more competently staved off by the Italians. Similarly, the Austro-Hungarian Fifth Army under Boroevic made little progress at the southern coast. Nevertheless, Below's sweeping success in the centre endangered the bulk of the Italian forces at the River Tagliamento.

Once his lines were rapidly broken on that first morning, Capello recommended a withdrawal to the Tagliamento. He was overruled by Cadorna who harboured hopes of repairing the damage for almost a week until, on 30 October, the majority of Italian forces were instructed to cross the river, a process that took some four days.

Meanwhile a German division had established a bridgehead further north at the Tagliamento on 2 November. Ironically, the success of the combined Austro-Hungarian/German forces in moving forward so rapidly began to work against them, with supply lines at full stretch and starting to fail.

Cadorna took advantage of the Austro-Hungarian/German inability to launch a fresh offensive by ordering a withdrawal to the River Piave, a mere 30 km north of Venice - a process that lasted until approximately 10 November. 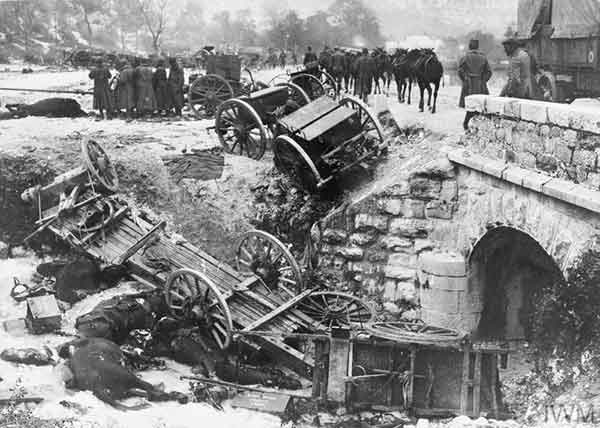 The scale of the Italian setback - some 300,000 casualties had been incurred (90% of which were as prisoners), with virtually all artillery lost - had already produced sizeable shockwaves among the Allied governments. At home Cadorna was dismissed (click here to read his official communiqué announcing defeat; click here to read French Prime Minister Georges Clemenceau's reaction) and replaced by Armando Diaz; a new Prime Minister, Vittorio Orlando, similarly took office, replacing Boselli. He promptly received assurances of increased military support from Allied governments.

Until Caporetto the Italians had been left to fight the Austro-Hungarian army alone on the Italian front. With the advent of German support and the disaster at Caporetto however this policy was revoked, with substantial Allied aid promised thenceforth. Six French Army divisions (under Fayolle) were supplemented by five British divisions (under Plumer), both boosted by large air contingents.

Italian public opinion, shocked by the events at Caporetto, rallied behind Orlando's government, with popular pacifist sentiment effectively silenced. The Austro-Hungarians attempted to follow-up the success at Caporetto with an attack at the Trentino on 12 November, but finding themselves short of reserves the attack petered out five days later, although sporadic fighting continued into December.