Fought in northern France between 10-13 March 1915, the Battle of Neuve Chapelle was the first planned offensive by the British Army on the Western Front. Nearly 40,000 British, Canadian and Indian troops took part. This was also the first battle where the Indian Corps fought its first major action as a single unit. 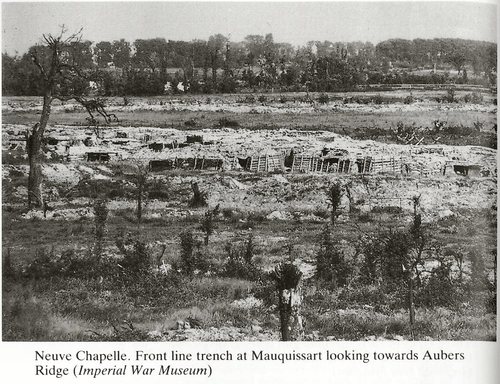 The village of Neuve Chapelle had been identified as a weak position in the German defences. As part of a series of Allied attacks, British and Indian troops would attempt to breakthrough German lines, then capture the important high ground of Aubers Ridge.

The battle began in the early hours of 10 March with a heavy artillery bombardment from hundreds of guns. Lasting 35 minutes, it was the most intense British bombardment of the war up to that point. When the artillery fire lifted, the infantry assault commenced with the Indian battalions in the lead. The assaulting battalions managed to break through German lines and into the village of Neuve Chapelle, fighting from house to house. By 9am Neuve Chapelle had been secured, but communications difficulties made it difficult to capitalise on this success. Further attacks during the following days proved less successful, particularly around the wooded area that lay beyond Neuve Chapelle to the south-east, known as Bois de Biez. German counter-attacks on 12 March met accurate rifle and machine gun fire from the British and Indians and left the battlefield littered with dead and wounded Germans. Finally, an order was given to halt all further British attacks and consolidate the ground that had been won.

Neuve Chapelle was captured but this victory had been limited and came at a cost of heavy casualties. More than 11,000 were killed, wounded or missing, including around 4,200 from the Indian Corps. The British line had advanced around 1,000 yards on a front of two miles, but severe losses had also been inflicted on the Germans.

Neuve Chapelle demonstrated that artillery was vital to success on the Western Front and that while breaking into enemy lines was possible, it would be much harder to break through them and hold on to any gains.