British attacks on the Somme had brought the front line close to the village of Pozières. There, in darkness on 23 July, the 1st Australian Division made an assault supported by heavy artillery fire. The ruined village was taken in hard and intense fighting and enemy counter-attacks were repelled. The Germans responded by pounding the area with their artillery. The capture of Pozières was a significant achievement, but within five days the 1st Division had lost 5,000 men. 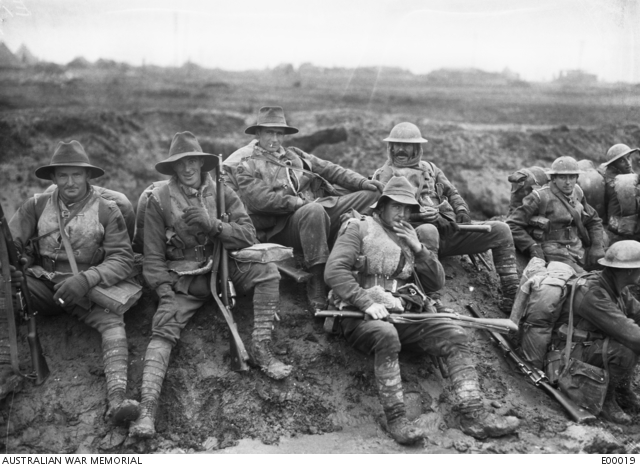 Sergeant Archie Barwick wrote: “All day the ground rocked and swayed from the concussion … we were all nearly in a state of silliness and half dazed, but still the Australians refused to give ground.”

The 1st Division was replaced by the 2nd, whose first attack met with disastrous losses. In further fighting the division captured some ground but suffered more casualties – overall, almost 7,000 in twelve days. The 4th Division was the next to take part, pressing its attacks towards the adjoining Mouquet Farm. With this move, the Australians were trying to threaten the enemy positions at Thiepval, where the British had been stuck for weeks. However, in attacking on a narrow front they became increasingly exposed to murderous shell-fire and yet more counter-attacks.

The three Australian divisions took their turn at Pozières and all suffered heavily. Then, with their numbers built up to only two-thirds strength, each was sent into the inferno for a second tour. Over a period of 42 days the Australians made 19 attacks, 16 of them at night; as a consequence, the casualties finally totalled a staggering 23,000 men, of whom 6,800 were killed.

For men thrown into the fighting at Pozières the experience was simply hell. The battlefield had become the focus of artillery fire from both sides. Attacks went in, some ground was taken, and then the enemy would counter-attack. Throughout this action the fighting was wild, and all the time the shelling tore up the ground, folded the trenches in, and blew away any protection.

I knew you would be ashamed if I played the coward, so I kept straight on at the head of my platoon. I was thankful to get [wounded] as it got me out of the firing line for a rest. Australia may well be proud of the part its boys played in taking Pozières.

The ordeal at Pozières, both physical and mental, was more than men could put up with for very long. Courage made little difference, what each man needed was endurance and luck. Sergeant R. Baldwin, of the 27th Battalion wrote:

We came out this morning as best we could. We are a very shaken lot. Well, we went in and relieved the first division on the night of August 1, six days ago. I saw some awful things although I never got a mark, we are all on the edge, all our nerves are wrecked, we lost some fine men.

Five Victoria Crosses were won. One of these was a posthumous award to Private Tom Cooke, a 35-year-old husband and father whose hobby before the war had been playing cornet in a band. In the opening days of the fighting, he was sent with a Lewis machine-gun crew into a dangerous part of the line. Soon he was the only man left. Against impossible odds, Cooke fought a lone action. He was later found dead at his gun – “a splendid example of determination and devotion to duty”. After the battle Cooke’s body – as with so many others – could not be found, and he remains one of the thousands of “the missing”.

Australian infantrymen who were once taught that “the bullet and bayonet are the deciding factors in fighting” saw at Pozières that the destructive power of artillery now dominated the battlefield. Shrapnel tore men to pieces, high explosive blew them to bits and destroyed trenches, smoke covered the turned-up, stinking ground. Added to this were gas shells. It was the worst artillery shelling that the Australians experienced in the entire war.

Many men buried and torn to pieces by high explosive. For a mile behind the trenches it is a perfect hell of shell fire. Terrible sights. The stretcher-bearers are having a terrible time, some blown to pieces together with their living freight. 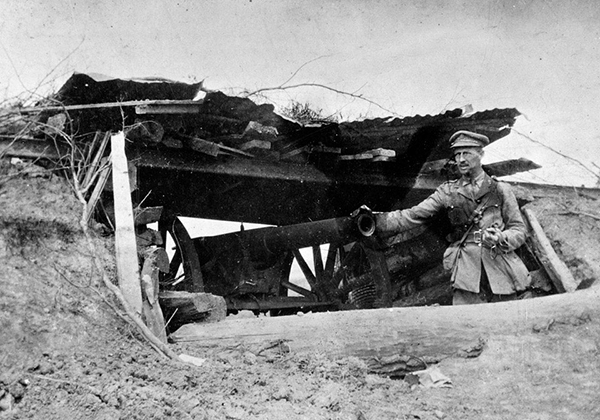 Finally, in early September the Australian divisions were taken out of the main battle and sent back to Flanders to recover and rebuild their strength. During this time the New Zealanders went into action on the Somme, fighting an important battle near Flers, a few kilometres from Pozières, an action in which tanks were used in combat for the first time.

Curtesy of the Australian War Memorial