The Evacuation Of Gallipoli

After thousands of British, French and Anzac lives add been lost in the attempts to gain significant ground in, Anzac Cove, Sulva Bay & Cape Helles, the order to evacuate was given on November the 22nd, the Gallipoli campaign was over.

The commanders of the Allied forces were already convinced that the campaign was over that they had already started the preparations to evacuate even before they received the official order. 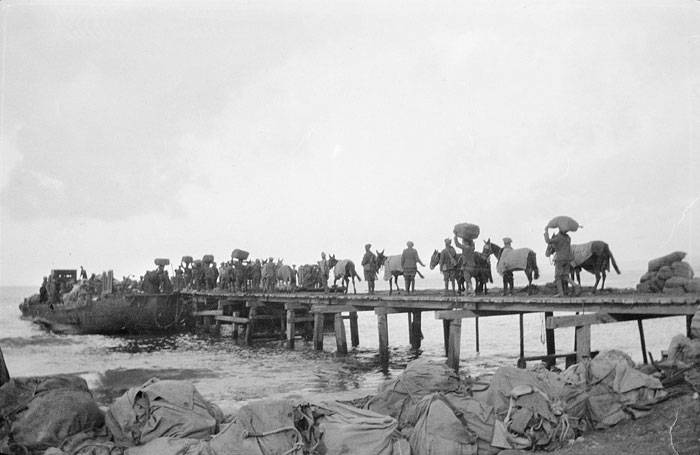 There biggest concern was Anzac Cove, the Ottomans were positioned high in the cliffs covering most of the area, it was feared that there would be heavy casualties if they were to notice them withdrawing. Brigadier General Sir Cyril Brudenell Bingham White planed a way to overcome this.

During the day he had the supplies moved around the camps to give the impression that the troops were simply preparing for winter. Then during the night, he had the Indian Mule Corps remove supplies to the shore to be loaded on the awaiting boats.

In order to maintain an appearance of a committed front, as the first troops were being sent to the ships the remaining ones had been informed this was only to rest them up before they return back to the front line.

Rumors spread around the troops of a withdrawal and by two weeks into December, the plan was officially announced. The full-scale evacuation of troops began on December 15th. This only happened by night, starting with supports and reserves, and then thinning out the trenches. By December 19th, 36,000 troops were evacuated out to sea, and only 10,000 remained.

That night, the remaining troops snuck off. On their way out, many set rifles and explosives on innovative timing devices and planted grenades and mines to both make the Ottomans think they were still there and to harass them with booby traps when they did finally come to inspect the abandoned trenches.

At 4:10 AM on December 20th, Anzac Cove and Sulva Bay were empty, without a single casualty. Though it is thought that the Ottomans were totally deceived by White’s plan, it is entirely possible that Mustafa Kemal, the Turkish General in Gallipoli, was willing to let the Allies slip away, as the campaign caused thousands of casualties among his troops.

In letters home, Anzac troops expressed great remorse at leaving their fallen comrades behind. Though conditions were harsh, food often quite inadequate, and skirmishes full of death, losing their friends in battle and then withdrawing, was a hard blow and difficult to overcome.

The British and French would finally leave Cape Helles in early January 1916.