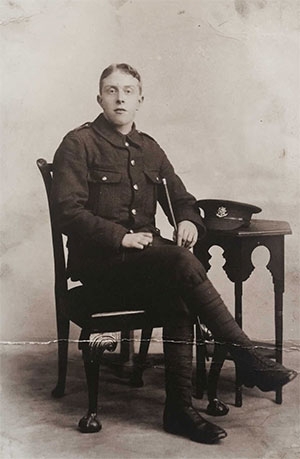 Enlisted Macclesfield. Son of Abraham and Ellen Wood of 134, Earle Street, Crewe. Previously worked at the Caxton Printing Works, Crewe and enlisted in November 1914. Landed at “C” Beach, Suvla Bay on August 8/9, 1915. His parents received a letter from his Captain stating that a stray shell had penetrated the roof of the dug-out Private Wood was sheltering in, only 10 yards from where he himself was sitting. Private Wood suffered a severe chest wound and died a few moments after the incident.

The Nantwich Guardian recorded Wilson killed in action 1 December 1915, within the article there is an appended letter sent by Wilson.

“Dear Mother, received your welcome letters, I have received them all, I think, also all the parcels. But want that from you and the Brotherhood. I always like to receive them from the good old home. We are having it very cold now, also plenty of sandstorms, they almost take your breath away. Thank Aunt Alice and Mr. Marginson for the parcels they sent to me, also Mrs. Taylor, the printer who contributed towards Mr. Marginson’s parcel. It was very kind of them. I will write as soon as I can get the writing pad from you, dear mother. Will you kindly send me some spearmint chewing gum, some of those black chlorodyne gums, and also a little chocolate? You know it very cold out here – that is the reason. But don’t go to much expense. I received Arthur’s letter; it was a good jolly letter. Remember me to all at home  and tell them they must have all enjoy themselves well at Christmas. Don’t worry about me. I wish you all a happy Christmas and a prosperous New Yar, with better luck too. Love to all, and may God keep with you and comfort you. From your loving son Wilson, Cheer up.”