This was a major British offensive during the First World War. From 9th, troops from the four corners of the British Empire attacked trenches held by the army of Imperial Germany to the east of the French city of Arras. The ground and date chosen for the battle was dictated by a desire to cooperate with the French, whose forthcoming offensive, planned by their General Nivelle, was to fall on the German positions topping the Chemin-des-Dames ridge, an area of high ground north west of Rheims. Closer cooperation with the French was ruled out, as the devastation of the Somme battles in July to November 1916 had so destroyed the infrastructure behind the lines that another offensive physically linked to the right flank of the French armies was judged unlikely to succeed. However, an attack in the Arras region was not the choice of the British Commander-in-Chief, Field Marshal Haig, who wanted the main effort of his armies to be directed north, around the Ypres salient. He hoped to clear the Belgian coastline, increasingly important to the Germans’ submarine offensive, and capture the strategically important railhead of Roulers, whose loss to the Germans would seriously hamper their war effort on this sector of the Western Front. However, Haig’s plan was overruled by Lloyd George, the British Prime Minister, who also made attempts to have Haig put under the direct control of Nivelle. 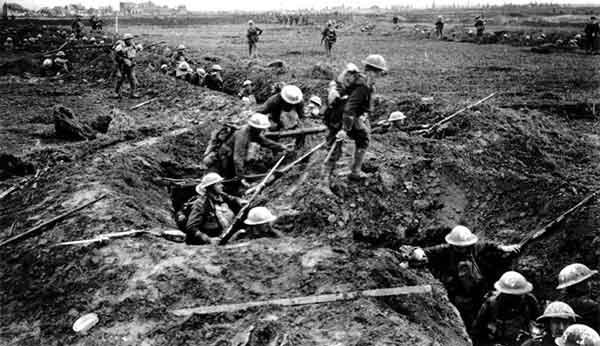 Following heavy losses in the fighting on the Somme, the Germans had taken the decision to shorten their lines. For the preceding nine months, Russian prisoners and support troops of the German army had been engaged in building a fearsome new defensive position, called by the British ‘The Hindenburg Line’. Beginning with local retirements, by the 18th March 1917 the German army had completed their withdrawal behind this line. This created serious complications for the British, dislocating their battle plans on the eve of the offensive. For the French the problem was even more acute, as their forthcoming attack was intended as a breakout from a salient that no longer existed. However, Nivelle decided to proceed with the attack. The British were to begin their operations a few days before those of the French, the intention being that the German reserves would be transferred north to counter their attack around Arras. With these now committed to battle, the much larger French force would punch through the German lines to the south and roll up the German army unopposed from the rear. This was to be the knockout blow on the Western Front, and Nivelle had boasted that his offensive would end the war. This was proved not to be the case.

Geographically, much of the battlefield of Arras is relatively flat. However, to the north of the city rises Vimy ridge, held by the Germans and dominating the local countryside. Capture of this ridge formed one of the major British objectives of the battle: so long as it was held by the Germans, the British lines of communication were under constant observation.

The Arras offensive has been divided into ten distinct actions, comprising battles, and flanking, subsidiary and subsequent attacks. The first two actions of the first phase, The Battle of Vimy and the simultaneous First Battle of the Scarpe, took place during the 9th –14th April. These are considered to have been a great success for the British and Imperial troops.

The Canadian and British forces of General Horne’s First Army were able to eject the German defenders; here and in the attacks south of the ridge made by General Allenby’s Third Army, advances were preceded by a considerable artillery barrage comprising both high explosives and gas. Third Army’s attack was so successful initially that advances were made up to a depth of three and a half miles, the farthest advance achieved in the west since the advent of trench warfare in 1914. This sudden triumph seemed to offer the possibility of a breakout, and cavalry were rushed forwards in the hope of pouring them through the gap and attacking the enemy’s lines of communication. Such hopes, however, proved bloodily deceptive.

Further south, the flanking attacks by the Australian and British troops of General Gough’s Fifth Army at Bullecourt on the 11th April, and those of the German forces of General von Falkenhausen’s 6th Army at Lagnicourt four days later were both stalemates.

After a pause that allowed the rotation of exhausted units (and that also allowed German reinforcements to pour into the area), General Allenby’s Third Army undertook phase three, The Second Battle of the Scarpe, fought on the 23rd to 24th

Farther north, General Horne’s First Army was committed to a subsidiary attack on La Coulotte on the 23rd April. Working in conjunction with Third Army, both took part in The Battle of Arleux, 28th – 29th April, the much larger fourth phase of the offensive.

These attacks and the last three major actions of the battle were successful only insofar as they relieved pressure on the French Armies, whose own offensive, begun on the 16th April, had run into serious trouble. While advances had been made, this was not the knockout blow promised by Nivelle; casualties were excessive, and the stark contrast between the promises of the French generals and the realities of the fighting caused a collapse in French morale. On the 3rd May, the men of the French 2nd division refused to attack; many of the units were described as going on ‘strike’, or more simply, mutinying. The French army was in real danger of disintegration, and the offensive was abandoned on the 9th May.

Going over the top

As the French armies still held over two thirds of the Western Front, Field Marshal Haig now had to keep pressure on the German forces and so prevent any attack on the badly shaken French. Concern for the Russian front were also growing as news of the revolution began to arrive in the West. The relief of the allied armies, however, came at the cost of Haig’s own troops. Third Army was compelled to fight phase five of the offensive, the Third Battle of the Scarpe, between the 3rd – 4th May, and another major action, the Capture of Roeux, on the 13th – 14th May. Finally, General Gough’s Fifth Army undertook a flanking operation, the Battle of Bullecourt, on the 3rd –16th May.

With the Battle of Bullecourt, the Arras offensive ended. In Canada, the taking of Vimy ridge has come to be mythologised as the heroic battle in which their national conscience was forged. Less romantically, the battle might be summed up for the majority of the troops involved by the Australian nickname The Blood Tub. This term, although used by Australians to describe ‘their’ Bullecourt, can equally evoke the experience of many in a battle that took a greater daily death toll than any other fought by the British Empire in the First World War.