Second Battle of the Marne

In what began as the last major German offensive of the First World War, the Second Battle of the Marne developed into a significant Allied victory. After it became clear that the Germans had not only failed in their aim to win the war in this offensive, but had in fact lost ground, a number of German commanders, including Crown Prince Wilhelm, believed the war was lost. 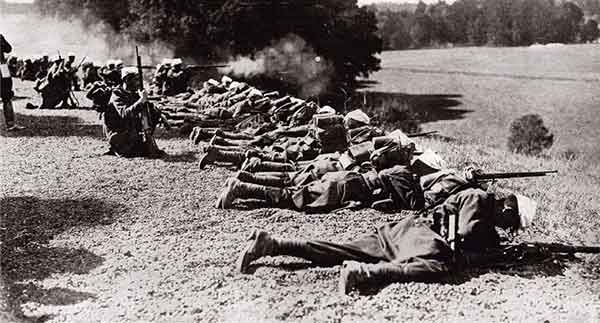 The battle took place over the course of 15 July-5 August 1918, in the final year of the war. Erich Ludendorff, effectively the German Chief-of-Staff (although Paul von Hindenburg was the ostensible commander), was convinced that the war could best be won by an attack in Flanders. To that end he determined to lure Allied forces from Belgium to the Marne in a huge diversionary attack, preparatory to a renewed offensive further north.

The second Marne offensive was launched on the back of an earlier push towards Paris which recaptured the Chemin des Dames ridge en route, a formidable position held by the Germans in 1914 and lost, at great cost to the French, during the 1917 Nivelle Offensive.

In attacking Reims in this way, Ludendorff aimed to split the French forces. Joining the French were 85,000 U.S. forces plus troops from Sir Douglas Haig's British Expeditionary Force (BEF), although the majority of the latter's forces were located further north in Flanders.

The attack to the east quickly proved a failure and was halted at 11 am on the first day without being resumed.

However the offensive to the west of Reims was more successful, breaking through the French Sixth Army and crossing the Marne at Dormans. Boehm, with the aid of six divisions, established a bridgehead nine miles in length and four in depth before the French Ninth Army, commanded by De Mitry and supported by British, American and Italian troops, halted his advance on 17 July.

With the Germans having ultimately failed in their efforts to break through, Ferdinand Foch, the Allied Supreme Commander, authorised a counter-offensive on 18 July, launching 24 divisions of the French army alone, in addition to U.S., British and Italian troops and some 350 tanks.

His aim was to eliminate the large German salient among the French lines. In this he was entirely successful. Mangin's French Tenth Army, and Degoutte's Sixth Army led the attack, advancing five miles on the first day alone. Berthelot's French Fifth Army and Eben's Ninth Army meanwhile launched subsidiary attacks in the west.

On 20 July the Germans ordered a retreat; by 3 August they were back where they had started at the launch of the great spring 1918 offensive: at the Aisne-Vesle rivers. The Allied counter-offensive was finally halted on 6 August by the now solidly entrenched Germans.

As a consequence of the disastrous result in the Marne, Ludendorff's planned Flanders offensive was initially postponed, then entirely cancelled. No further large-scale attempt to win the war was undertaken.