Robert Georges Nivelle was a French artillery officer who served in the Boxer Rebellion, and the First World War. Nivelle was a very capable commander and organizer of field artillery at the regimental and divisional levels. In May 1916, he succeeded Philippe Pétain as commander of the French Second Army in the Battle of Verdun, leading counter-offensives that rolled back the German forces in late 1916. During these actions he and General Charles Mangin were already accused of wasting French lives.

Following the successes at Verdun, Nivelle was promoted to commander-in-chief of the French armies on the Western Front in December 1916, largely because of his persuasiveness with French and British political leaders, aided by his fluency in English. He was responsible for the Nivelle Offensive at the Chemin des Dames, which had aroused skepticism already in its planning stages. When the costly offensive failed to achieve a breakthrough on the Western Front, a major mutiny occurred, affecting roughly half the French Army, which conducted no further major offensive action for several months. Nivelle was replaced as commander-in-chief by Philippe Pétain in May 1917.

Nivelle attained his popularity among the French politicians as the man who had recaptured the fort at Douaumont during the Battle of Verdun. This not only made him a national hero, it also led to Nivelle getting support for his ideas from the very top, Aristide Briand, the French Prime Minister at the time. When Nivelle announced his plan for a large attack on the German lines that would be so overwhelming that it would swamp them within 48 hours, Briand announced his support for it. Hubert Lyautey, the French War Minister, was not so keen and resigned. Sir Douglas Haig, mindful of what had happened at the Somme, also opposed the plan. Regardless of this, it went ahead.

The huge offensive, involving 1.2 million men, was the plan of Robert Nivelle, Commander-in-Chief of the French Army. By the time the Nivelle Offensive was over, tens of thousands of Allied troops had been killed or wounded; the French Army had been pushed to mutiny in over half its divisions and Nivelle had been sacked.

The thinking behind the Nivelle Offensive was of a similar to that of the Somme campaign in 1916. Nivelle was convinced that a vast & devastating attack against the Germans would result in victory within 48 hours with just 10,000 casualties.

The plan was for a major assault by French forces in the Aisne region supported by a secondary attack by British forces at Arras, Vimy Ridge and at Bullecourt on the Hidenburg Line.

By April 12th the Canadians had successfully taken Vimy Ridge, the Australians had suffered badly at Bullecourt. On April 14th Haig decided to halt the attack by the British and Commonwealth forces as he waited for news of how the French were doing.

The British and Commonwealth forces sustained over 130,000 casualties, the French suffered 187,000 casualties. 317,000 casualties in all for the Allies in just five weeks of fighting. This equated to around 10,000 men killed or wounded for each day of fighting. 61 square miles of land was taken from the Germans and 20,000 German prisoners were captured. 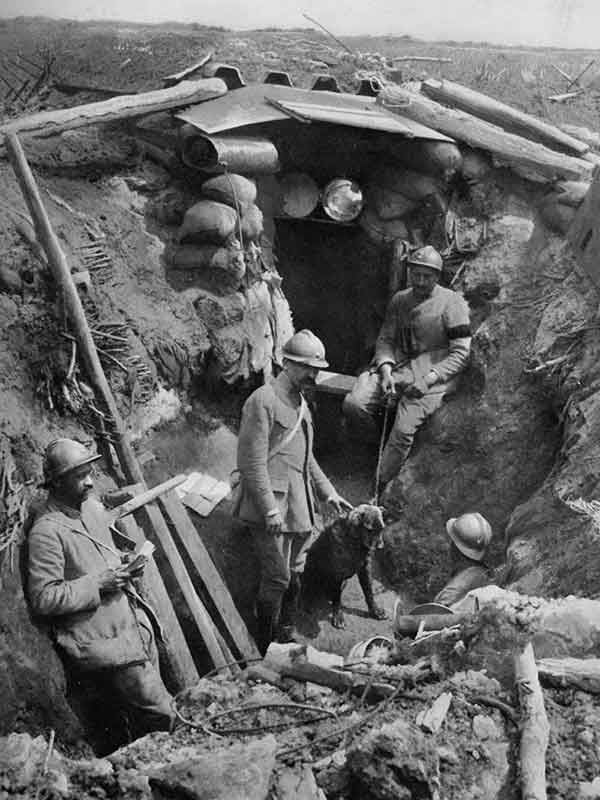 After the disastrous Second Battle of the Aisne, the main action in the Nivelle Offensive , the French soldiers started to mutiny. General Robert Nivelle had promised a decisive war-ending victory over the Germans in 48 hours; the men were euphoric on entering the battle. The shock of failure soured their mood overnight. The mutinies and associated disruptions involved, to various degrees, nearly half of the French infantry divisions stationed on the western front. The new commander, General Philippe Pétain, restored morale by talking to the men, promising no more suicidal attacks, providing rest for exhausted units, home furloughs, and moderate discipline. He held 3,400 courts martial; 554 mutineers were sentenced to death but over 90% had their sentences reprieved. The mutinies were kept secret from the Germans and their full extent was not revealed until decades later.