Germany broke through on the Somme

The 1918 Spring Offensive or Kaiserschlacht (Kaiser's Battle), also known as the Ludendorff Offensive, was a series of German attacks along the Western Front during the First World War, beginning on 21 March 1918, which marked the deepest advances by either side since 1914. The Germans had realised that their only remaining chance of victory was to defeat the Allies before the overwhelming human and matériel resources of the United States could be fully deployed. They also had the temporary advantage in numbers afforded by the nearly 50 divisions freed by the Russian surrender (the Treaty of Brest-Litovsk). 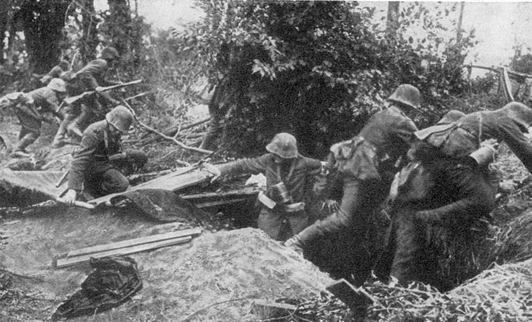 There were four German offensives, codenamed Michael, Georgette, Gneisenau and Blücher-Yorck. Michael was the main attack, which was intended to break through the Allied lines, outflank the British forces which held the front from the Somme River to the English Channel and defeat the British Army. Once this was achieved, it was hoped that the French would seek armistice terms. The other offensives were subsidiary to Michael and were designed to divert Allied forces from the main offensive on the Somme.

No clear objective was established before the start of the offensives and once the operations were underway, the targets of the attacks were constantly changed according to the battlefield (tactical) situation. The Allies concentrated their main forces in the essential areas (the approaches to the Channel Ports and the rail junction of Amiens), while leaving strategically worthless ground, devastated by years of combat, lightly defended.

The Germans were unable to move supplies and reinforcements fast enough to maintain their advance. The fast-moving stormtroopers leading the attack could not carry enough food and ammunition to sustain themselves for long and all the German offensives petered out, in part through lack of supplies.

By late April 1918, the danger of a German breakthrough had passed. The German Army had suffered heavy casualties and now occupied ground of dubious value which would prove impossible to hold with such depleted units. In August 1918, the Allies began a counter-offensive with the support of 1–2 million fresh American troops and using new artillery techniques and operational methods. This Hundred Days Offensive resulted in the Germans retreating or being driven from all of the ground taken in the Spring Offensive, the collapse of the Hindenburg Line and the capitulation of the German Empire that November.