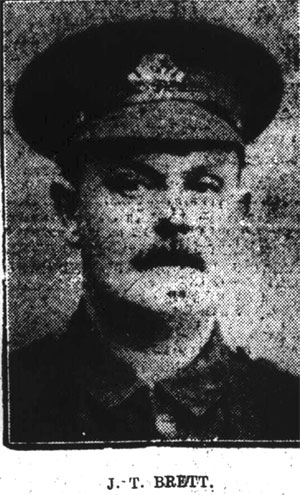 Private Brett and his sons

Private J.T. Brett, of 9, Carrington Street, Laird Street, Birkenhead, has the honour of not only serving his country himself, but having two sons also on active service at the present time. Private Brett (who, as a civilian, was a well-known tram driver on the Borough-Road route) is with the 14th Bn. Cheshire Regiment, stationed at Prenton. One son, Private John Brett, is with the 4th Cheshire Regiment at Northampton; and the other Private J.R. Brett is with the 3rd Battalion of the “Pals” (Kings Liverpool) at Knowsley Park.

His son John Brett was transferred from the Cheshire Regiment to the Manchester Regiment, he was killed in action Sunday 13th May 1917.