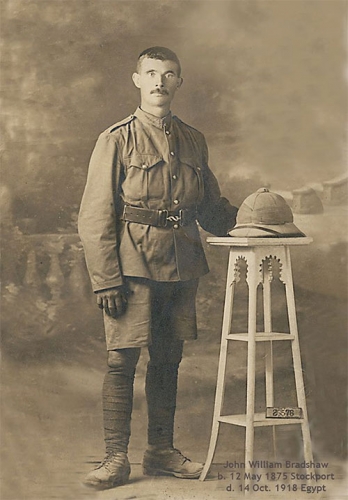 Nothing is known for certain about John's life, except that army records published in the 1920s indicate he was born in Stockport and enlisted in the town. Although it cannot be said with any certainty that it is the same person, the family history website, CheshireBMD, records that the birth of a John William Bradshaw was registered at Stockport in 1875. Similarly a John W Bradshaw got married to Annie Winfindale in 1904, at St Mary's Church Stockport. What can be said with certainty is that when John came to join the army, he enlisted into the Cheshire Regiment. His service number, 25330, dates this to around the late spring to early summer of 1915. He served overseas with the Regiment but it is not known with which Battalion. At some point, whilst overseas, he was transferred away from the front line and served with the Labour Corps for a while. This is likely to have been during a period of poor health that made him unfit for the trenches but still able to perform useful service. Still later, and by then recovered to health, he was back in action. This time, he was transferred to the specialist machine gunners who operated the heavy Vickers guns. John died of natural causes. This was very possibly due to complications arising from the influenza epidemic of the autumn of 1918 which killed millions world-wide.


Cheshire County Memorial Project would like to thank John Hartley for this information on John William.