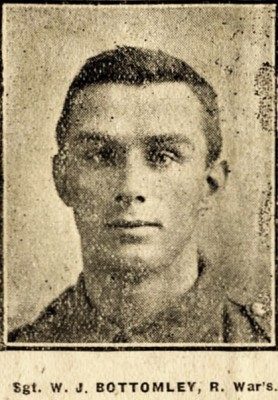 When the census was taken on 5th April 1891, four month old William was living at 1 Richmond Hill with his parents and siblings George (6) and Annie (5). Ten years later, the family had moved to 28 Townley St, Macclesfield, and William had a 3 year old brother, Harold. By 1911, William's father had died and the family had moved to 39 Silk St, Macclesfield. William's mother was employed as a school caretaker and William worked alongside her as an assistant caretaker.

William was educated at St George's Church of England Primary School, Sutton (south Macclesfield) and attended the St Michael's Church and Duke Street Sunday School. He was a member of the choir at St Michael's church for many years, and later became a bell-ringer there with his older brother George.

At some time between 1911 and 1913 William moved to Birmingham, where he was employed as a tram conductor. William's mother later remarried and moved to 142, Great King St, Macclesfield.

In late 1914 William enlisted in the Warwickshire Regiment at Aston, Birmingham, when he was living at Stirchley, near Bournville in Birmingham. He was sent out to France in June 1915, but was able to return to Macclesfield to spend Christmas 1915 with his mother, also attending the Duke Street School Christmas party and joining the bellringers of St Michael's for a meal.

William's death was reported in the Macclesfield Times on 18 February 1916:

"Dear Mrs Bottomley - It is with the greatest regret that I write to tell you that your son, sergeant Bottomley, was killed last night. He was out on patrol in front of our wire, and the patrol was fired on by the enemy. Sergeant Bottomley was killed outright, and I can assure you that his death was painless. With difficulty we managed to get his body back to our lines and he has been buried today in the quiet little village cemetery in the rear of the trenches, where his grave will be looked after. He was one of my finest NCO's and came to me with a draft from the entrenching battalion as a sergeant. He had to revert back to private on joining this unit, but his promotion has been rapid and he had just been made a sergeant again - in fact, only four days ago. He was liked by the men, was an ecellent worker, and a man I could trust...."

Sergeant Bottomley ... was the second son of Mrs Bottomley... [who is] the caretaker of the Duke Street School and resides at 9 Duke St.

His elder brother, George, went out to the Dardanelles with the 1/7th Cheshires last year. After two months on the Peninsula he was taken ill. He returned to England six weeks ago and has now been discharged from service on account of medical unfitness.

Sgt William Bottomley is buried in Grave Ref. I. E. 17. of Foncquevillers Military Cemetery in France. His mother asked for the following inscription to be added to his headstone:

The Commonwealth War Graves Commission holds casualty details for Sgt William Bottomley, and he is listed on the Imperial War Museum’s Lives of the First World War website.

In Birmingham, William Bottomley's name is inscribed in the WW1 Book of Remembrance held in the Birmingham Hall of Memory.

Brother of George Bottomley, who served in Gallipoli as Private 2562 with the 1/7th Cheshire Regiment and in 1916 was discharged from the army as unfit for further service.