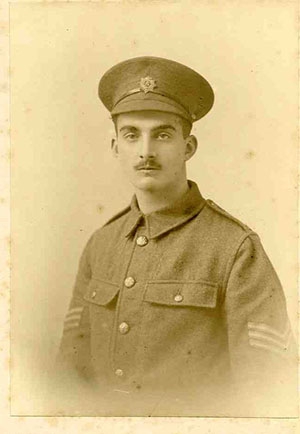 Born in Madeley on the 21st January 1891 Reginald was the eldest son and one of seven children born to Margaret Caroline and Joel Settle, he had two older sisters Gwendoline born 1887, Violet born 1890 and then younger siblings Marjorie born 1894, his brother Mellard born 1895, Isabel born 1897 and Kathleen born 1905. His father Joel, owned a colliery distribution business called Settle, Speakman Colliery Factors.
By 1901 the family had moved from Madeley to the Hill, in Alsager, Cheshire. Reginald went to school at Elleray Park, Wallasey, and then on to Radley College, Oxford. In 1911 the family were still living at the Hill, Alsager. Reginald age 20 was working for his father as a Colliery Assistant 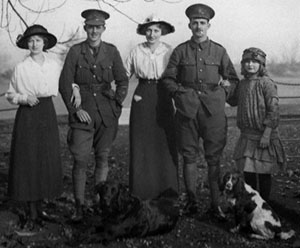 Reginald on the right, with his brother and three of his five sisters.

He became the personal driver to General Sir William Robertson, Sir William was Chief of Army Staff based at GHQ in France, and after a short period he was promoted to sergeant.
By late 1915 Reginald was responsible for the upkeep of all the vehicles used by General Sir Douglas Haig.
Reginald wanted to see more action and by the summer of 1916 he was given a commission as 2nd Lieutenant in the Royal Flying Corps, the medal roll shows his discharge on being appointed into the RFC as the 26th June 1916.

He was posted to 15 Squadron and was flying in a BE2c when he was killed in action on the 23rd July 1916 while flying over the German lines.
Flight News reported his death. The pilot heard a shot but thought it had missed, when the plane landed they found Reginald dead with a single rifle wound.
Reginald is buried in Beavuval Communal Cemetery, Somme, France. Grave Ref: A.14