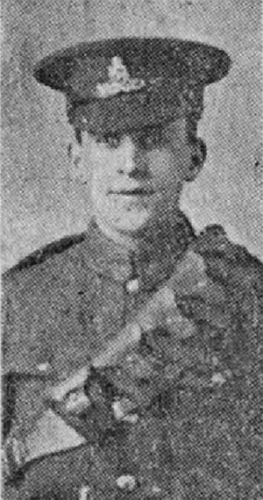 Cyril Harold Barratt was born in 1894 at Alsager Bank, Staffordshire, the son of Ellen and David William Barratt, a teacher.  In 1901, seven-year-old Cyril was living at Apedale Road, Chesterton, Staffordshire, with his parents and siblings Lionel (11) and Ida (9).

By 1911 the family had moved to 37 Beech Lane, Macclesfield, and Cyril was working as an assistant poor law clerk.

The death of Cyril Barratt was reported in the Macclesfield Times on 15 September 1916:

A FORMER BOY SCOUT – GUNNER BARRATT DIES OF WOUNDS
Mr D W Barratt, 37 Beech Lane, Macclesfield, second master at the Byron Street Council School, received official news on Saturday that his youngest son, Gunner Cyril Harold Barratt, Royal Field Artillery, died on the 4th inst from wounds sustained in France. He had previously been reported wounded on August 21st, but a letter received from him some days later stated that the injuries were only slight and did not necessitate him going into hospital… it is presumed that he succumbed to a second wound.

Gunner Barratt was 22 years of age and came to Macclesfield from Staffordshire 13 years ago, when his father was appointed on the staff of the Lord Street School. Mr Barratt was transferred to Byron Street when that school was opened. The deceased received his education at Lord Street School, and on leaving became clerk to the Master of the Macclesfield Workhouse. Four years ago he secured a similar appointment at the Withington Workhouse, Didsbury, and held the position of first clerk at the time of enlistment… Deceased was a scholar at the Beech Lane Sunday School and was formerly connected with the Boy Scouts. He was a member of the Parish Church Men’s Bible Class…

Gunner Cyril Barratt is buried in Grave Ref. Plot 2. Row B. Grave 26. of the Corbie Communal Cemetery Extension, Somme, France. His mother requested the inscription "There is a link death cannot sever, love and remembrance live for ever" to be added to his gravestone.

Thanks to Anne, relative of Cyril Barratt, for her assistance in compiling this information.