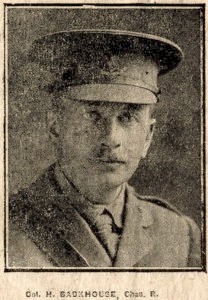 Henry Backhouse was born in 1873 at Shaw House, Wardleworth, near Rochdale, the eldest son of Edna Crabtree and her second husband George Backhouse, a cardboard, pasteboard and blanket manufacturer.

At about 18 years of age Henry took a commission in the 5th Cheshire Volunteers, in which his father was a major. However, he relinquished this commission on 16th January 1900 in order to serve in the 22nd Imperial Yeomanry (service number 1696) during the Boer War. On enlistment he stated that he was born in Rochdale, was 26 years 3 months old, and was a manufacturer. He was described as 5 feet 7½ inches tall, with a fair complexion and brown eyes, and named his father, George Backhouse of Harold House, Macclesfield as his next of kin. Henry joined as a private but was promoted to sergeant the following day, serving in South Africa from 30th January 1900 until 17th June 1901, when he was discharged. His conduct was said to be 'Very Good', and he was awarded The Queen's South Africa (QSA) Medal, with Cape Colony, Orange Free State, and South Africa 1901 clasps. On returning to England he resumed his commission in the newly-formed local 7th (Territorial) Cheshire Regiment.

At the time of the 1901 census, Henry was serving in South Africa. In 1911, he was described as a director of a paper staining company (Backhouse and Coppock) and living at Brook Cottage, Lane Ends, Macclesfield with his widowed mother and younger brother Hugh, who was a captain in the North Staffordshire Regiment.

In August 1914 Henry was mobilised with the Territorials and trained with the 1/7th Cheshires in various locations. Whilst at Baldock in April 1915 he succeeded Colonel E. W. Greg on his retirement from command, and took the battalion to Gallipoli in July of that year. He assumed temporary command of the 159th Infantry Brigade on 14th August due to Brig.Gen. Cowans being wounded.

On 19th November 1915 Henry was evacuated from Gallipoli to a hospital in Malta, suffering from sciatica and rheumatism. He left the hospital on December 12th for a rest camp, and, with no official army transport available, he boarded the S.S. Persia on December 28th at Malta in order to rejoin his regiment, which by that time had left Gallipoli and was now in Egypt. Two days later, the ship was torpedoed by a German U-boat when about 40 miles off Crete and quickly sank. Of the 519 passengers and crew, which included several women, only 176 survived.

The news, received from official sources on Saturday, that Lieut.-Colonel Henry Backhouse, who commanded the 1/7th Batt. Cheshire Regt. in the Dardanelles, had been drowned through the torpedoing of the P&O liner Persia, came as a painful shock to Macclesfield. It was not known, even among the members of his own family, that the gallant officer was on the ill-fated vessel...

The Persia left London on December 18th, bound for Bombay, and carried His Majesty's mails. She called at Malta on December 28th, and two days later, when about 40 miles to the southward of the east end of Crete, was torpedoed. She was struck on the port bow and sank in a few minutes. Only 5 or 6 boats got away from the ship... The survivors were landed at Alexandria, being picked up after 30 hours at sea...

Towards the end of the year ... the Colonel fell victim to sciatica and rheumatism. He was removed to hospital at Malta in November, a fellow patient in the same hospital being Dr Averill, of Macclesfield, who was attacked with jaundice and has since been invalided home. He left the hospital on December 12th for a rest camp, and it is presumed that when he boarded the Persia on December 28th at Malta it was with the intention of proceeding to Egypt to rejoin his regiment.

In Colonel Backhouse, the 1/7th Cheshires has a leader who was popular with all ranks and his loss will be keenly felt. Within a very short time of the landing, his abilities were recognised, and when Brigadier-General Cowan was wounded, Colonel Backhouse was entrusted temporarily with... that high position, the command of the battalion... devolving upon Major W P Reade, of Congleton.

Colonel Backhouse was born at Bollington, where his father first established the extensive business now carried on at Sutton Mills, Macclesfield, under the style of Messrs. Backhouse & Coppock, Ltd. Later the undertaking was transferred to Pickford Street, Macclesfield... Colonel Backhouse was educated at the Macclesfield Grammar School, and upon leaving, entered the firm, with which he has been associated ever since.... Mrs Backhouse, the Colonel's mother... resides at Brook Cottage, Lane Ends, which was also the home of her son, who was a bachelor.

Colonel Backhouse had been connected with the Volunteers from his teens, when he joined the Macclesfield Company of the Cheshire Regiment as a Second-Lieutenant. By the time of the South African war he had attained the rank of Captain, and had been for some time in command of the depot at Macclesfield Drill Hall. Eager to take part in the Boer campaign, he relinquished his captaincy and enlisted in the Cheshire Imperial Yeomanry as a trooper. He was quickly promoted to sergeant, and went out with the Yeomanry to South Africa, where he took part in many engagements...

The Colonel's brother, Captain Hugh Backhouse, is an officer in the Regular Army, who has seen service in many parts of the world; his half-brother, Mr G H Mason, is an Adjutant of the Macclesfield Battalion of the Cheshire Volunteer Regiment; and a younger brother, Mr Walter Mason, is the commandant of a Volunteer Cavalry Regiment in India, where he is engaged as a tea-planter. Col Backhouse was a member and former treasurer of Macclesfield Golf Club, and for many years a prominent member of the Old Macclesfield Hockey Club.

Lt. Col. Henry Backhouse has no known grave and is commemorated on stone no. 4. B. on the Chatby Memorial in Egypt, which commemorates almost 1000 Commonwealth servicemen who died during the First World War and have no other grave but the sea. The Commonwealth War Graves Commission holds casualty details for Lt. Col. Henry Backhouse, and he is listed on the Imperial War Museum’s Lives of the First World War website.


Research by Rosie Rowley and Harry Carlisle, of Macclesfield.