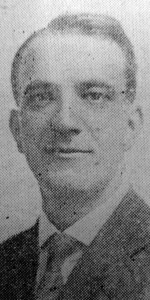 By 1901 George Avery had died and his widow and children (including the youngest, seven-year-old Wilfred) had moved to 8 Langley, near Sutton Lane Ends, Macclesfield. Thomas had left home and was living at Ridge Hill Farm, Sutton Lane Ends, employed as a cow boy. He later worked at Langley Print Works and then trained to be a landscape gardener at Holmes Chapel college.

In 1903 Thomas was a witness to the marriage of his older brother John to Annie Pickford at the Brunswick Wesleyan Methodist Chapel, south Macclesfield.

Thomas emigrated to Canada in September 1906, settling in Calgary. His younger brother Wilfred, also a landscape gardener, joined him in about 1909-10.

Thomas Avery enlisted at Calgary on 29 January 1915, joining the Canadian Infantry as a private. On 29 May 1915, he embarked for England on the SS Northland, and his wife also went to England, sailing from Quebec on the SS Carpathia on 17 May 1915 and staying at 4 Prospect Terrace, Sutton Lane Ends, with the Avery family. After training in England, Thomas was drafted to France on 18 September 1915.

On 16 December that year, Thomas was admitted to No 6 Canadian Field Ambulance, suffering from influenza, but swiftly recovered and returned to duty one week later. He was promoted to the rank of sergeant on 19 June 1916, and attended a 'grenade course' between 14 and 21 August 1916.

It is not known where and when Thomas died; his service records state only that he was killed in action between 24 and 30 September 1916. According to a story passed down in the Avery family, Thomas Avery served alongside his brother Wilfred, but the two became separated during a battle. Wilfred later searched for Thomas, turned over a body and found it was his brother.

News of Sergeant Avery's death was reported in the Macclesfield Times on 13 October 1916:

Langley is proud to have many serving… a number of them have been wounded [but] Saturday last news came of the first to be killed in action. The deceased is Sergeant Thomas Avery, aged 31, who had been in France for over twelve months with the 2nd Canadian Contingent… a sergeant in the bombing section. News of his death in action on September 26th was received with the deepest regret throughout the village. Sergt Avery was employed at the Langley Print Works as a boy, and… he studied at the Holmes Chapel Agricultural School. He went out to Canada in 1906 and had established a good business as a landscape gardener in Calgary. He was captain of the YMCA Football Club… and was highly respected… He married a Nova Scotian lady some three years ago, and his widow is at present staying with Mr and Mrs John Avery at Sutton Lane Ends…

Mr John Avery, brother of the deceased, is head gardener to Mr Harold W Whiston, JP, at the Elms, and his mother lives in Langley village. When he emigrated to Canada, Sergt Avery was accompanied by his younger brother, Wilfred, who is now in France with the Canadian Force…

Sgt Thomas Avery has no known grave and is commemorated on the Vimy Memorial near Arras, France. The Vimy Memorial is the great memorial to all Canadians who served their country in battle during the First World War, and also bears the names of 11,000 Canadian servicemen who died in France - many of them in the fight for Vimy Ridge - who have no known grave.

The Commonwealth War Graves Commission holds casualty details for Sgt Thomas Avery, and he is listed on the Imperial War Museum’s Lives of the First World War website.

With grateful thanks to Mr David Avery for providing family information.