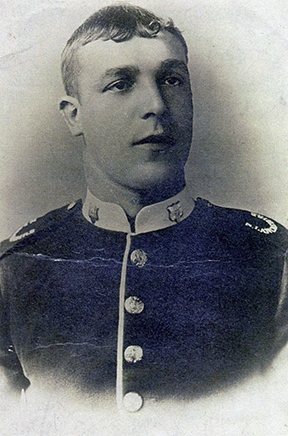 In the late spring of 1877, Edward Ashton married Sarah Ann Potts at St Thomas’ Church, Stockport. Later in the year, Charles was born. As young man, he joined the regular army and, in 1905, married Elizabeth Sharples, also at St Thomas’.

By the time war was declared on 4 August 1914, Charles was an established family man. He had finished his term in the army and was working as a porter and shunter at Edgeley Station (and would be later included in the London & North Western Railway Company’s Roll of Honour). He and Elizabeth were living at 25 Hempshaw Lane with their three children. Charles was still on the army reserve and was mobilised when war was declared. He probably had to report to the Regimental Headquarters at Preston before joining the Battalion, then at Aldershot.

October brought the troops to Belgium and the First Battle of Ypres. On the 27th, the Battalion left its camp and marched though the village of Hooge (just outside Ypres – now called Ieper) to a large wood east of the village. British troops advancing in front of them encountered far superior numbers of Germans advancing towards them.

On the 29th, there were reports of Germans massing for an attack and, in the late afternoon, Charles and his comrades advanced north of the village of Gheluvelt and dug in.

The Regimental History records that during the night of 30/31 October “the four Companies were strung out along a line of trenches, most of the time under a heavy bombardment and on the early morning of 31 October, the Battalion was ordered to retire through the wood to Hooge, where it formed up. On receipt of fresh orders, it went forward again at 9am and, in company with the Gordon Highlanders, made a successful attack, ending with a bayonet charge on the enemy, inflicting considerable loss upon him. Advancing again, the Battalion occupied a position facing the village of Gheluvelt.”

One of the Battalion’s officers also recorded the events “At 9am we try to move through Gheluvelt, but in crossing a lane we are enfiladed by a machine gun. Captain Ryley (went) off to try and locate the gun. That was the last heard or seen of him.”

The diary continues “We reach the main road at Gheluvelt and then come to a standstill, for it is quite impossible to advance any further on account of the terrific shelling……We withdraw again to our trenches. The movement has lasted only half an hour and has cost us dear – two officers and half the two companies have been placed hors de combat. We retire on Hooge and find a general retirement has been ordered, but this is almost immediately countermanded and we advance. We press forward and attack, drawing the enemy out of a wood on the side of the Menin Road. We bayonet and shoot hundreds and are weary of fighting.”

Charles was one of 68 men from his Battalion killed during the day, bringing the total since they arrived on the Western Front to 256. After the fighting, Charles was listed as being missing. His body was never found and identified. The determination of the British Army had resisted the German attack and their attempt to break through to Ypres failed.