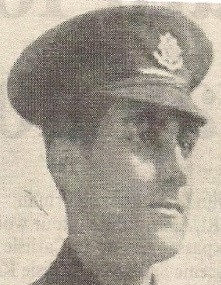 Haron Baronian was born in West Didsbury, Manchester in 1897 to Zarch (a merchant) and Shushan Baronian of Brae Cottage, Legh Road, Knutsford. His parents were both Turkish citizens (which might have caused a few problems when Turkey entered the war on the side of the Central Powers). He was one of six children who seemed to have had a privileged upbringing as the family had several servants. His father being a cotton merchant trading mainly with China.

He attended Manchester University and was studying Chinese, where he was a member of the Officer Training Corp.

In January 1916 and arrived at the front in July of that year. Haron joined the army, becoming Private no.33006 of the 8th Battalion of the Cheshire Regiment.

Mr. and Mrs. Baronian of Brae Cottage, Legh Road, Knutsford had official news on Monday of the death in action of their second son, Private Haron Baronian of the Cheshire Regiment.  Private Baronian joined the Cheshire Regiment in January of last year. Five months later he was drafted to the Front.  He developed an enthusiasm for military life and wrote most cheerfully of the conditions.  On January 31st, he was wounded and one of the most treasured possessions of the family is a letter he wrote shortly after, describing the attack on the enemy defences during the course of which a bullet penetrated his hand word was passed round on January 31st he wrote, that we were to charge the trenches the next day. On February 1st at 9.30 we went over the top  that it the popular name out here  but as the distance to the enemys lines was too great to charge all the way we advanced at a steady pace.  Of course, the bombardment which started before we went over continued as we advanced, and we could see the shrapnel sweeping ahead of us.  We had got to within 30 yards of the enemys frontline trench when I suddenly felt an awful pain like a stab through my left hand. I suppose I fell down.  At any rate a friend called Alec Saunders stopped a little with me and bandaged me up roughly, stopping the bleeding.  As I was lying on the ground I could see the enemys prisoners being hurried back to our line in the open.  Our fellows carried the trench easily, and after consolidating it, some of them went over.  After a time, I saw a sergeant wounded in the arm and was able to bandage him up as best as I could with one hand. Then I crawled up to the enemys trench, and after being with several wounded fellows sometime we got to a fairly safe place in the front.  After a great deal of waiting we got back to our own line, and going through various dressing stations we went to the hospital at XXXXXX where we stopped the night. The next morning we got on the boat, arriving at XXXXXX about 4pm on February 3rd.

Private Baronian was educated at Bowden College, then Manchester University and the School of Technology.  A brilliant student, he was a great prize winner, especially in the French examinations.  At the university he studied Chinese, the intention being for him to join his father in his business of cotton merchant trading with China.  Of a sunny disposition, the young man was most popular among his school contemporaries.  Shortly after the outbreak of the war he trained with the OTC, but later joined the army from the School of Technology as a private.

Two other sons of Mr. and Mrs. Baronian are on service, one being with the Marconi factory engaged on war work.

Despite the fact that Haron was an excellent scholar and obviously intelligent, and he was a member of the Officer Training Corp (OTC)  in the British army of the day he would have found it impossible for him, of Armenian extraction, to get a commission.

The family commissioned a statute of Haron which now stands outside the Red Cross Headquarters in Knutsford. It was sculpted by Hamo Thornycroft shortly after Haron's death.

Researched and compiled by Tony Davies.