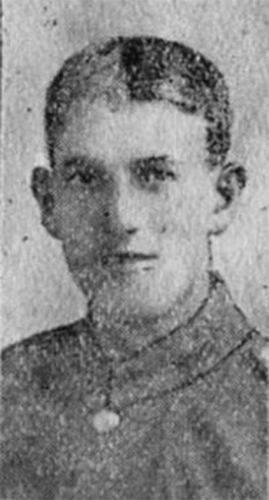 Born in 1889 at Macclesfield, son of James and Martha, (nee, Bracegirdle) Mottershead, of, King Edward Street, Macclesfield. Uriah was educated at Christ Church School; he was a member of the Young Men’s Class. In the 1911 census Uriah was shown to be working as a brewer’slabourer, and living at 1, Court, 7, Chester Road. In the second quarter of 1911 Uriah married Bertha Hammond Brindley. Uriah enlisted at 11 April 1916 at Macclesfield, and after basic training was drafted to the Western Front. The 1st/ 4th Battalion were active in making raids into enemy territory in the Rue du Bois sector in the months of May and June 1917. Uriah was killed by a piece of shell whilst helping to improve his billet, Sunday, 10 June 1917, he was aged 28 years.

The death of Private Mottershead was reported in the Macclesfield Times on 22 June 1917:

LOCAL ATHLETE FALLS – KILLED AT HIS BILLET – “BRAVE AND CHEERFUL SOLDIER” – Mrs Mottershead, 18 (sic) Charles St, Macclesfield, has been notified that her husband, Private Uriah Mottershead, South Lancashire Regt, was killed in action while fighting in France on June 10th. The information was contained in letters from the deceased soldier’s officers, the chaplain and a comrade. Lieut. L F Walmsley writes: “Your husband was killed by a piece of shell while helping to improve the cover of his billet. His end was instantaneous, and he suffered no pain at all. His loss is felt very much by all in the company, for he was always so cheerful and everybody liked him… Private Arthur Dean, a friend of the deceased, said he did his duty well and was always bright and cheerful….

Private Mottershead was 28 years of age and a native of Macclesfield. He was educated at Christ Church School and was connected with Trinity Wesleyan Chapel and Sunday School. Before enlistment he was employed as a labourer at the North Cheshire Brewery, Charles Street. Private Mottershead was a well-known local sportsman. He was formerly a member of the Macclesfield Athletic Club and held the gold medal for the junior championship of the East Lancashire Association for running, together with the novice’s medal of the club for the season 1911-12. He also gained a silver cup and several other prizes. The deceased soldier was also proficient on the football field and figured in the Broken Cross team when they won the championship of the Macclesfield and District League. Private Mottershead joined up in April 1916 and was drafted out to France about ten months ago. He leaves a widow and two children, aged two and five years. His brother-in-law, Sergt. A. Brindley, Cheshire Regt. has been discharged from the Army on account of wounds received at Vimy Ridge, as a result of which he has lost the use of the left hand.