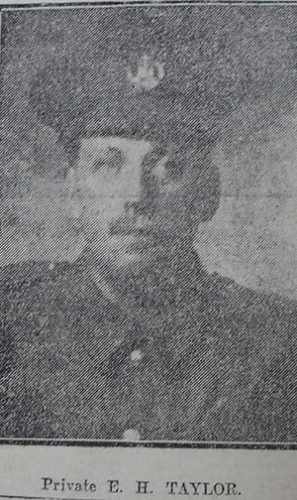 Was Recommended for a Commission.

Mrs. Taylor of 70, Willmer Road, has received official notification of the death at a casualty clearing station in France, from wounds received in action, of her husband, Pte. E. H. Taylor. Previous to joining the colours, which he did in June 1916, he was employed as a clerk at Liverpool G.P.O. He was expected home on leave shortly to take up a commission, for which he had been recommended. Mrs. Taylor has had a letter from her late husband’s captain, in which he says :- “Pte. Taylor belonged to my Company, and a keener soldier could not have existed. He was always to the fore, and took a great interest in all his work. In fact, I had recommended him for his commission …. At the time of his being wounded he was doing work in the trenches amid heavy shelling.” The writer goes on to express the loss of the officers, N.C.O.’s, and men of the Company feel by Pte. Taylor’s death.

Mrs. Taylor has three children, the eldest of whom is only eight. Pte. Taylor was 37 years old.