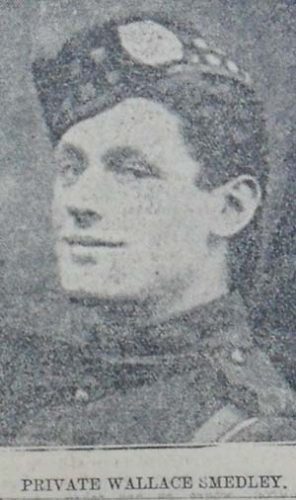 FATALLY WOUNDED IN THE HOOGE BATTLE.

Official intimation of the death of Private Wallace Smedley (19) has been received by his parents, Mr. and Mrs. Smedley, who reside at 17 Mellor Road, Prenton. The deceased enlisted in the Liverpool Scottish early in September, and after being in training in Blackpool, he left for the front with the third draft of his battalion in January. Her took part in some heavy fighting, notably in the gallant bayonet charge of his regiment at Hooge on June 16th. It was during this last engagement that Private Smedley was severely wounded, and died at Boulogne hospital on June 19th. He was buried in the churchyard at Bailleau, a town nineteen miles north-west of Lille.

An elder brother of the deceased, Private Arthur Smedley is serving with the 4th Cheshires, at present stationed at Bedford.