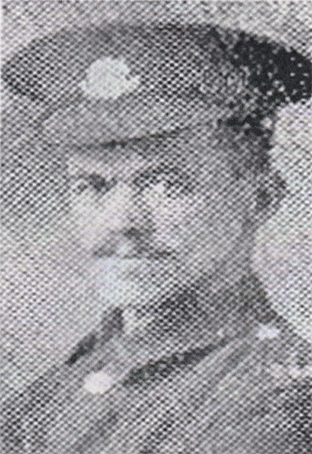 Prior to mobilisation Private Charles William Worrall had served many years with the Colours, first in the 5th Volunteer Battalion of the Cheshire Regiment and later in the 1/7th Battalion, the Cheshire Regiment enlisting in the Pre-War Territorial in 1912. He was one of the famous 31 Terriers who transferred from the 1/7th Battalion to the 5th in order to come to grips with the enemy sooner, but was rejected on medical grounds. He transferred to the 21st Battalion the Manchester Regiment in 1916 who were under the command of the 91st Brigade, 7th Division. The 21st Battalion were in action near Polygon wood between the 2nd and 6th of October 1917. By October the battlefield had become a sea of mud, through which attacking troops struggled in the face of German machine gun and shell fire, often halting to pull themselves out of the quagmire or to do the same for their comrades. The last phase of the battle in October and November had the objective of capturing the village of Passchendaele itself. They spent most of the rest of the month in various camps before returning to action south of Menin Road on the 26th of October. The Battalion was relieved the next day and moved to a camp at Ebblinghem. Private Charles William Worrall was killed in action on the 24th of October 1917 in The Battle of Passchendaele (The Third Battle of Ypres). He has no known grave and is commemorated on the Tyne Cot Memorial.

Extract from the Congleton Chronicle 1917.

By the death of Private Charles Worrall of the Cheshire Regiment. The Army has lost a brave and courageous soldier and the town a good citizen. He has been described as an ideal soldier. The sad news that he had been killed in action was received on Thursday last week and caused poignant grief to those who recognised his sterling worth. Mrs. Worrall who is left with six children had previously received the following letter.

I deeply regret to have to inform you that your husband did lose his life in action on or about the 26th of October 1917. It is really a personal matter because Charlie looked after me from the day I joined the Battalion until I went home in September. He was a splendid fellow and his decease is deeply regretted by myself and his surviving comrades. I tender to you my heartfelt sympathy in your loss and hope that the boy will grow up to be as good a man as his father.


Cheshire County Memorial Project would like to thank John and Christopher Pullen for this information on Charles.