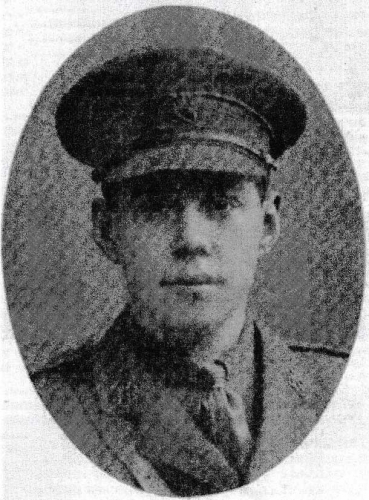 Son of Mr. Robert Lewis Johnson and Mrs. Sarah Johnson of Butterton Hall, Trentham, Barlaston, Staffordshire, and Henshall Hall, Congleton, Cheshire. He had two sisters, Edith Mabel and Mabel Constance Johnson, along with eight brothers, Harry, Robert Lewis, Ernest James, Arthur Stuart, Frank Charles, George Washington, Alfred G, and Eric Frederick Johnson . He was born in New Jersey in the U.S.A, and he worked as an Earthenware Tile Manufacturer. His brother George Washington Johnson, died on active service on the 1st of November, 1918. Captain Arnold Leslie Johnson served with the 1/5th Battalion, North Sraffordshire Regiment under the command of the 137th Brigade, 46th (North Midland) Division, until they were disbanded on the 29th of January 1918. Officers and men were dispersed Captain Johnson even though serving with the 5th Battalion was gazetted to the 6th Battalion. It was on the 29th of September 1918 that the 6th Battalion took part in the storming of the San Quentin Canal and seized the Riqueval Bridge over the San Quentin Canal before the Germans could fire the explosive charges.

The next and last objective was the Hindenberg Trench, two Companies of the 6th North Staffs now attacked and in spite of some machine gun fire stormed the trench at 08:45 hours. During these attacks, they captured two field guns, several machine guns and many prisoners. The casualties for this action amounted to 91, 3 Officers were wounded 15 Other Ranks killed, 3 missing, and 70 wounded.

The victory of the 29th had broken the back of the Hindenberg Line but there still remained systems of defences in the surrounding villages to the east, strongly fortified and full of machine guns. On the 2 nd of October, orders were received that the 46th Division was to attack and capture the village of Montbrehain and the line south of it as far as the village of Sequehart. In the evening they took up assembly positions east of Levergies for the attack. The barrage commenced at 06:00 hours on the 3rd of October and was immediately followed by the attack, at first there was little opposition but on reaching the main line of defence, brisk fighting took place. After a stubborn resistance the enemy were driven back with heavy losses and a large number of prisoners were taken. The Brigade then headed for Mannequin Hill a low ridge which was the final objective. It was defended by a large number of machine guns and many of them were on the flank and enfilading the men. In spite of this they pressed forward and completed the task. Later in the afternoon a counterattack was made on the 137th Brigade on Mannequin Hill and they were forced of the slopes. The Brigade counter attacked and regained some of the slope but it was found impossible to retain the summit of the hill which was swept by machine gun fire. In this fighting the 6th Battalion the North Staffs suffered heavy casualties, 3 Officers were killed and 4 wounded. The losses amongst the Other Ranks were 21 killed, 15 missing and 143 wounded. Between the 3 rd of October and the 11th of November the Battalion saw more fighting. On the 10th of October they left their billets in Bohain where they had been in reserve since the 8th of October and took up assembly positions on the edge of Riqueval Wood. Their task was to push strong patrols through the wood and after overcoming snipers and machine guns they reached the other side of the wood at 12 45 hours. The Battalion then pushed on through another wood and joined up with the French. During the day 26 prisoners, 2 Field Guns, 4 Trench Mortars and 5 Machine Guns were captured and the Battalion had 2 men killed and 6 wounded. Later on they were brought back into support where they were on the 16th of October. They were now very short of Officers though very strong in Other Ranks. All that remained of the Officers were the Colonel, 1 Captain, and 4 Lieutenants. It was during the actions of the 14th of October 1918, that Captain Arnold Leslie Johnson was killed, his body was never recovered but he is remembered on the Tyne Cot Memorial, Belgium.

Extract from the Congleton Chronicle 1918

We deeply regret to record that Captain A. L. Johnson, of the North Staffordshire Regiment was killed in action on the 14th of October 1918, aged 27. He was the son of the late Mr. R. L. Johnson and Mrs. Johnson, of Henshall Hall, Congleton. Captain Johnson, whose brother, Colonel Harry Johnson, D. S. O. is a prisoner of war in Germany, was the youngest member of the firm of Messrs' Alfred Meakin Ltd, Tunstall. He joined the army at the commencement of the war, when the whole of the North Stafford's Rugby Fifteens, of which he was a member, answered the country's call. Six months after his enlistment he was given a commission. He was wounded at the Hohenzollern Redoubt in the Battle of Loos on the 13th of October 1915, when Colonel Knight and many other local officers, including Captain Reginald Tavernor Johnson, cousin of Captain Johnson, fell in action. He was quickly promoted to full Lieutenant and received his Captaincy and given command of a Company nine months ago. He was well known and highly respected and great sympathy is felt for Mrs. Johnson and family in their sad bereavement