Son of George A and Susannah Elmore of 5, Post Office Place, Northwich.

Mrs Elmore, of Northwich has received official notification that her son, Private George Elmore of the Royal Scots who was reported missing at the beginning of July last year, was killed in action at that date. Private Elmore who had made football his profession was a native of Witton, and when in his teens secured a place in the Albion’s eleven. From the time of his introduction into the team he showed exceptional promise, being full of dash and very clever. Several prominent clubs cast anxious eyes on him, but it was Burton which persuaded him to migrate. From the brewery town club, he was transferred to West Bromwich Albion for a nice sum, and then went to Bristol Rovers, with whom he made a big name in the Southern League. Whilst there he received an injury to his knee which caused him to relinquish the game for a time and he returned home. 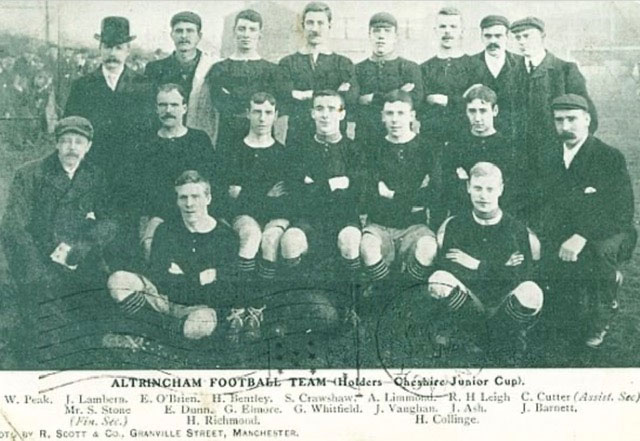 Altrincham next persuaded him to try his luck again, and whilst with them he recovered his old form. He was later seen with Partick Thistle in the Scottish League and was transferred from them to Paisley St. Mirren. He returned to Witton Albion in 1914, but a few months later resolved to play the “greater game” and joined the Royal Scots. He was 36 years of age and was the chief support of his widowed mother.