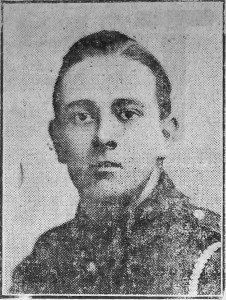 Jack Start was born on 15 February and baptised on 3 April 1898 at St Michael's Church, Macclesfield, the son of Eliza and Thomas William Start, a silk designer of 35 Barton St, Macclesfield.

In 1901, four-year-old Jack was living at that address with his parents and older sister Annie (5). Ten years later the family were at the same address and Jack had a younger brother, Walter, then aged 8.

By 1913 the family had moved to Taylor's Square, Slater Street, off Park Lane, Macclesfield. Jack, then aged 15, had left school and was employed as a clerk, and he enrolled at Macclesfield Technical School to learn Intermediate Shorthand. At the time of his enlistment into the Army in October 1916, Jack was employed by Neckwear, Ltd.

In his spare time Jack was closely involved with Christ Church. He attended the Church and Sunday School, was a bell-ringer for the church, and was keenly interested in the Scouting movement, becoming Scoutmaster of the 3rd Macclesfield (Christ Church) Troop at the age of 17.

Jack joined the Cheshire Regiment as Private 58197 in October 1916 but was later transferred to the Royal Welsh Fusiliers. After training, he was drafted to France in May 1917. Having his first leave home in August 1918, he had only been back at the front two months when he was killed by a shell on 6 October 1918.

Jack's death was reported in the Macclesfield Times on 8 November 1918:

PTE JACK START, Royal Welsh Fusiliers, killed on October 6th, was the son of Mr and Mrs T Start, Taylor's Square, Slater Street, Macclesfield. He was killed instantly by a shell. Twenty years of age, Pte Start enlisted about two years ago, and had served in France a little over a year. He was home on leave about six weeks ago. Pte Start was educated at Christ Church School and was a regular attender at the Church. He was also the Scoutmaster of the Christ Church Troop of Boy Scouts, the command of which he undertook at the age of 17 years... Pte Start was [previously] employed at Neckwear Ltd.

His death was also reported in the Macclesfield Courier on 9 November 1918:

PRIVATE J START - Mr and Mrs Start, of 7 Slater Street, Park Lane, have this week received a letter... stating that their elder son, Private Jack Start, was killed instantaneously by a shell a month ago last Sunday. Private Start was 20 years of age, and received his education at Christ Church Schools. He was always intimately connected with Christ Church, was a communicant, a bellringer, a member of the Sunday School and the Boy Scout Troop. Joining the Troop when quite young, he was exceedingly keen and worked his way up, first to patrol leader and eventually to be Scoutmaster of the Troop. He also formed a football team in connection with the troop, and some very hard-fought matches were played with the other local junior teams. He was one of the members of the team from the Christ Church Troop which was successful in winning the Gamage Shield...

On 21 December 1918, the Macclesfield Courier printed a report of a memorial service held at Christ Church for former Christ Church Scoutmasters and bellringers Jack Start and John Nuttall:

The War Office confirmation of the sad death of Private J Start has been received by his parents, and a memorial service was held to his memory in Christ Church on Sunday week. It was attended by the elder scholars from the Sunday School, and the Young Men's Bible Class, of which he was a prominent member. He was well-known and respected as the keen and energetic Scoutmaster of the 3rd Macclesfield Troop (Christ Church), with whom he has been connected since 1909. Many Scouts from various troops were present, thus paying a last and loyal tribute to his memory.  The 15th Scout Band Troop (under the leadership of Mr Hankinson) played the "Dead March in Saul" in the church, and also accompanied the hymns. Private A Parker, late Bugler of the 3rd Macclesfield Troop, sounded the Last Post at the close of the service...

The late Private Start was 20 years of age. He joined the Army in October, 1916, and was drafted to France in May, 1917. Having his first leave from France in August this year, he had only been back at the front two months, when he was killed instantaneously by a shell.

The memorial service was also held to the memory of Mr John Nuttall, another late Scoutmaster of the 3rd Macclesfield (Christ Church) Troop, who succumbed to heart failure following an attack of pneumonia. This makes three scoutmasters and two assistant scoutmasters (besides several scouts) which this Troop has lost during the great war.

Private Jack Start is buried in Grave Ref. V. A. 17 of the Prospect Hill Cemetery in France. His father asked for the inscription TO LIVE IN THE HEARTS / OF THOSE WE LOVE / IS NOT TO DIE to be added to his headstone.

The Commonwealth War Graves Commission holds casualty details for Private Jack Start, and he is listed on the Imperial War Museum’s Lives of the First World War website.

Elsewhere, he is recorded in the Central Council of Church Bell-Ringers Great War Roll of Honour, held at St Paul’s Cathedral, London.