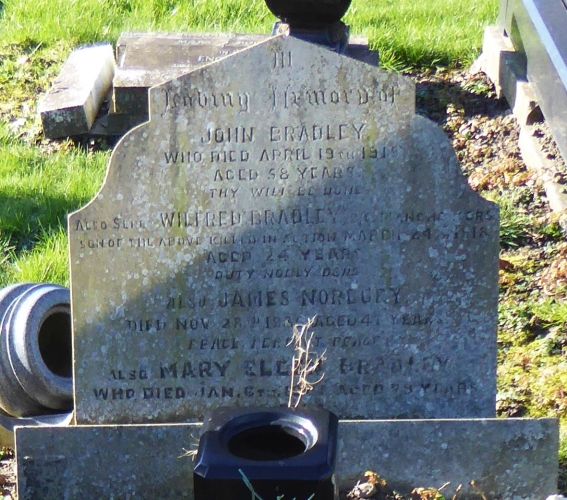 Wilfred was educated at Mill Street School, where he attained a very creditable Standard Grade VII, and after leaving school found employment as a tin smith. In September 1908 he enrolled at Macclesfield Technical School for part-time or evening classes to further his education.  By 1911 Wilfred was working as a slipper maker at the Macclesfield Shoe and Slipper Company.

Wilfred enlisted in October 1915 and initially served with the 17th Cheshire Regiment with service number 30068. He was later attached to the Manchester Regiment.

He was reported missing in the Macclesfield Times on 7 June 1918:

MISSING - Sergt Wilfred Bradley, Manchester Regt, son of Mrs Bradley, 14 Brock St, Macclesfield, was posted missing on March 21st. He joined the Army over two years ago and went out to France last February. Sergt Bradley is 23 years of age and was educated at Mill Street School. He attended Trinity Wesleyan Sunday School and Chapel and was formerly employed at the Macclesfield Shoe and Slipper Works, Sunderland Street. Two brothers are serving: Lce-Cpl J W Bradley, King's Liverpool Regt (in France) and Pte Albert Bradley, Monmouthshire Regt (in England). The former has been twelve months at the front and was over on leave at the beginning of this year.

Wilfred's death was later confirmed, as reported in the Macclesfield Times on 21 March 1919:

His Life for His Country - The War office has notified Mrs Bradley, 14 Brook (sic) Street, Macclesfield, that her son, Sergt. Wilfred Bradley, att. 2/6th Manchester Regt, who was posted missing between March 21st and March 31st, 1918, was killed in action on March 24th of that year. Sergt Bradley was twenty-four (sic) years of age and was educated at Mill Street School under Mr T H Hewitt. He enlisted in October, 1915 and at that time was in the employ of the Macclesfield Shoe and Slipper Co. Sergt Bradley, who was one of three soldier brothers, was connected with Trinity Wesleyan School and Church.

Wilfred is remembered in the inscription on the family gravestone in Macclesfield Cemetery, plot X19234: