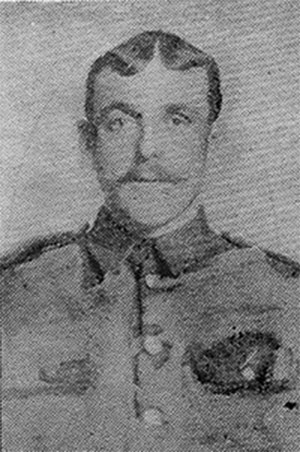 Father to Emmanuel, William Albert, Hannah, Emma Jane, Alice May, Elsie and Harold Blease. On the 5th of June 1916, in the Isolation Hospital, Sealand Road, Chester, Annie, aged 34, wife of Emmanuel died of Pulmonary Tuberculosis. He had four sisters, Hannah, Mary, Annie and Sarah Blease, as well as one brother Charles Blease. He was employed as a Pit Man.

Private Emmanuel Blease enlisted in the Cheshire Regiment at Macclesfield on the 3rd of September 1914 at the age of 34. He had already served 8 years as a territorial with the 5th and 7th Battalions of the Cheshire Regiment. He was posted to the 11th Battalion on the 18th of September 1914. The Battalion moved to Codford St Mary. The Battalion like most of the New Army were short of equipment, parading in Civilian clothes and using walking sticks for drill and sleeping 20 men to one small tent. When winter came there were few blankets and many men were sleeping in mud. A neighbouring Battalion deserted and there was the possibility of serious trouble. This was avoided with an extra beer ration and the opportunity for the men to appoint a spokesman to air their grievances. In November 1914 they were in billets in Bournemouth, they moved to Aldershot in May 1915. On the 3rd of July 1915, he overstayed on his pass out from 21:30 hours until he was arrested by the Civil Police in Nottingham at 23:20 hours, his punishment was to pay all expenses including Civil Police and Military Escort. On the 25th of September 1915 the Battalion embarked from Southampton for France where they went into action for the first time at the Battle of Loos where their attack was halted by uncut wire and heavy machine gun fire. They then went into the trenches around Ploegsteert in Belgium.

While serving here suffered from Gastro Enteritis and was taken to No. 76 Field Ambulance Station and then transferred to the No. 12 Casualty Clearing Station at Hazebrouk on the 31st of January 1916. On recovery he was temporarily assigned to No. 182 Company of the Royal Engineers in April 1916 followed by a posting to the No. 175 Company. On the 3rd of July 1916 he suffered gun-shot wounds to the left leg and was taken to the No. 34 Casualty Clearing Station then to the No. 76 Field Ambulance before being admitted to the No. 3 Canadian General Hospital at Dannes Camiers on the 9th of July 1916. He re-joined his unit at Rouen where he was transferred to the 1st Battalion who were holding the trenches around Abbeville in France. Further injuries to his leg resulted in his admission to No. 14 Camp Reception Station on the 24th of September 1916 after which he re-joined his unit, this however did not last as he was readmitted to the No. 15 Field Ambulance Station with recurring problems and was taken to the No. 11 Camp Reception Station in November 1916. On the 1st of March the Battalion moved to Cambrai and in April fought with the Canadian Army to capture Vimy Ridge, where the attack took place in a snow storm. In June 1917 Emmanuel was again sick and in hospital for 2 weeks, the conditions were undoubtedly wearing him down. He was granted leave in England from the 11th to the 21st of August 1917. Four days after returning from leave he was in trouble and given 14 days Field Punishment No.1 by his Commanding Officer. This consisted of being shackled in irons and secured to a fixed object, often a gun wheel for up to 2 hours a day and was a set punishment for any minor offence, such as drunkenness on active service. It was known as "crucifixion" by the Tommie's and due to the humiliation nature seen as unfair.

After a short period of rest, the 1st Battalion, the Cheshire Regiment, part of the 15th Brigade, 5th Division went back into the front line on the 23rd of October 1917. They relieved a Battalion of the Somerset Regiment near Bedford House. This was the name given to the property by British troops. It was the Chateau Rosendal, a country house, with moats, in a small wooded park near the Village of Zillebeke (2 kilometres south of the town of Ypres.) The 24th was a quiet day, but on the 25th there was intermittent enemy shellfire and 4 men were killed. Another 13 were wounded. Early the next morning, the Battalion was in support of men of the 13th Infantry Brigade who attacked German positions at Polderhoek Chateau. The attack was successful, and many prisoners were taken including the German Commander. The Germans counter attacked later in the day pushing the British troops back to their starting positions. The enemy then put down a very heavy artillery barrage in the vicinity of the Cheshire's Battalion Headquarters, which killed 5 men, and wounding another 37. Intermittent shelling continued throughout the 27th and the Battalion was relieved in the evening by the 16th Battalion, The Royal Warwickshire Regiment, and the Battalion pulled back to Bedford House. Unusually, there was little activity from the enemy during the relief, but during the day, 2 men had been killed and another 17 wounded. It was during this operation that Private Emmanuel Blease was wounded and subsequently died. On the 28th of January 1918, he was mentioned in the London Gazette on the award of his Military Medal.

Extract from the Congleton Chronicle 1917.

Seldom has it been our lot to record sadder or more pathetic circumstances than those which surround the death of Private Emmanuel Blease of the Cheshire Regiment who died on 27th of October 1917 as a result of wounds received in action. Few of our townsmen were imbued with a more loyal and patriotic spirit than this gallant soldier and notwithstanding the fact that he had a wife and seven children, he, realising the magnitude of the task set the Allies felt that it was his bonded duty to do his bit. So it came about that in the early days of the war, tragic to so many he was sporting the regimental crest of the glorious Cheshire Regiment. He realised that it was inevitable that he would in due course come to grips with the enemy, so he threw himself into the necessary training with a wholeheartedness that elicited the admiration of his superior officers. After twelve months training he went out to France and in the grim school of reality he continued to carry out his duties in exemplary manner, so much so that he was recommended for a high award for gallant conduct in the field. While in France in June 1916, Private Blease received the sad news that his wife had died, but the inexorability of his military duties did not permit him a furlough to enable him to attend the funeral. Thus, he continued to fight and in the subsequent sanguinary battles he fought in the manner immemorial to the true Anglo Saxon. But relentless Fate had decided, and he passed away on the 27th of October. The news that told the sad story that seven children were orphans was conveyed in the following letter, which was addressed to the eldest son.

I am writing to tell you and your brothers and sisters, some very sad news. Your father was brought to our Dressing Station early this morning very badly wounded. The doctors did all they could for him but I am sorry to say he succumbed after being passed out from the doctors room. I had to go out and make a list of all the belongings and put them safely into a bag so that the War Office can send them home to you and it was amongst his letters that I saw a postcard with your address on. I expect you will receive these things very soon, they will go from here to the base and then onto England. I have done stretcher bearing like your father and know how hard it is, but you Emmanuel and all of you remember what the bible says Greater love hath no man that he lay down his life for his friends. I pray that God will comfort and help you in your bereavement and that when you grow up to be a man, you will do your duty like your father. His father, also Emmanuel, was stated to be the guardian of his seven children. With the exception of the eldest, Emma Jane, his six other children were fostered out to his sisters. In May 1918 a pension of 57/6d was awarded for the children.

The following letter from Private Charles Blease who is serving with the Cheshire Regiment has been received by his mother who resides in Twemlow Yard, Congleton, I now sit down and send this short letter wishing to find you alright. I knew to my sorrow, that my brother Emmanuel had been killed before receiving a letter from Mrs. Reade, but I did not like to inform you. He was only 20 yards away from me when he was wounded and while on his way to the Dressing Station he was hit again. I received a letter from a Corporal at the Field Ambulance Station stating that Emmanuel had died and that he was buried in a grave. He was recommended for the Military Medal for bravery in the field. I will now close my letter, hoping that God will protect you in this great bereavement.

Cheshire County Memorial Project would like to thank John and Christopher Pullen for this information on Emanuel.