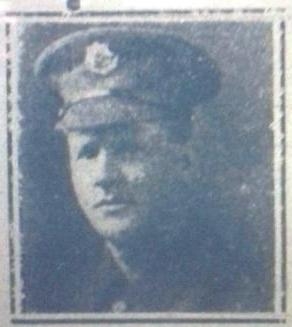 Thomas Worthington was born in Runcorn in 1888 to Harry and the late Harriet Worthington(died 1912 aged 62).He married Eva Clark, having two sons, Joseph William Worthington, who was a shipwright and died in 1929 aged 21, and Thomas who was born in 1908.

He is listed in 1911 census as a chemical labourer working at the Salt Union Salt Works, Weston Point. It also states that the family lived with his father in law, Joseph Clark at 53 Handley Street whose occupation was listed as a shipwright.

He enlisted in Frodsham in December 1915 before going to France with the 13th Battalion, the Wirral pals. The Wirral Pals were formed by Lord Leverhulme and consisted of men from the Lever Brothers Works at Port Sunlight. Unique is the numbering system for the Wirral pals, given a W prefix before their regiment number. Thomas , numbered 24068 wasn’t an original pal but must have been assigned to that regiment to make up the numbers.   He served for more than twelve months, before being wounded and returning to an English hospital before returning to France. It is suspected he would have been injured in the battles of the Somme as this is when the Wirral pals first saw action. His medal card states he was in the 13th Cheshire’s until his last posting which was to the 6th, as a signaller.

At the time of his injury the 13th and 6th Battalions of the Cheshire Regiment were involved in the 3rd Battle of Ypres more commonly known as Passchendaele. Thomas as a signaller, would be responsible for ensuring communication lines where intact and also installing new lines to ensure the forward troops could communicate to the command posts and artillery for support. If this could not be achieved due to constant shelling then he would relay messages from the front line to the nearest command post.

On the 20th September, the 6th Battalion was in action on the Menin Road, attacking a German strong point near Basseville Beek. They held it all night, but in the morning found that on both their flanks the troops had failed to come into line and flanking fire from both sides forced them to withdraw.

Thomas could have been injured at anytime during this period, he may have been involved in the attack or just trying to maintain the communication lines in the battlefield, with the constant shelling from both sides.

He would have been evacuated from the battlefield to Ypres, then west to the large military hospital at Lijssenthoek.

The first news of his injury was reported by the Captain of his Company, stating he had been wounded , but also stated that he felt the loss of his services as he was a splendid soldier, always cheerful, willing and a fine example to other men.

Five days later , a letter from the Chaplain reported the sad news that he had succumbed to his wounds. He wrote

” Already, I fear, the very sad news of your husband will have reached you. He came to our hospital on the 24th very badly wounded in the arm and very weak from the loss of blood. Everything possible was done for him, but he lived only a few hours, and passed away to the rest he so bravely sought. We have laid his body in our cemetery, where a cross will be made for his grave. He knew he was passing away, though he had not a great deal of pain. He told me to send you his love and to kiss the kiddies for him. We had prayers together, and I can’t tell you how bravely he faced the end with perfect confidence and faith in the care and love of god. Certainly your children have lost a brave and noble father, and it will be your care to bring them up worthy of him. I know what your grief will be, but trust you will have the same courage that he showed”.

He was awarded the British War Medal and Victory Medal.

The hamlet of Lijssenthoek became the largest evacuation hospital in the Ypres Salient between 1915 and 1920 and is one of the biggest military cemeteries in the region with 10,784 graves