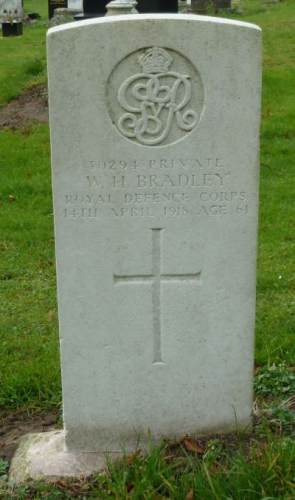 William Herbert Bradley was born on 5 September 1864, the son of Maria (nee Mottershead) and Samuel Bradley, a fruiterer and greengrocer. William was quite flexible with his age throughout his life; in most censuses his age was out by a couple of years either way. In 1871, six-year-old William (recorded in the census as aged eight) was living at 35 Derby St, Macclesfield with his parents and siblings Samuel (20), John (18), Ellen (17), Vernon (13), Elizabeth (4) and Mary (1).

William first enlisted into the Army at Warrington on 28 December 1881, joining the South Lancashire Regiment with service number 315. After just over two years of training and home service, he served in South Africa for almost three years, returning home to serve from 1889 until he was discharged at the end of his term of service in December 1893. His conduct during his twelve years of service was "very good".

William re-enlisted on 5 September 1914, joining the local 7th Cheshire Regiment with service number 2915. He understated his age by three years, saying that he was only 47 years old. Probably because of his previous army experience, he was promoted to lance-corporal on 26 January 1915; however, he was reduced to the rank of private and forfeited two days pay in June for "absence and drunkenness." The following year William was transferred to the Royal Defence Corps (similar to the World War Two Home Guard, for older servicemen not suitable for front-line service).

William became ill in 1917, while serving at Sandycroft, near Chester, complaining of pains in his chest and coughing at night. After a medical examination in London, William was discharged on 2 January 1918 as no longer physically fit for war service. He was said to be of good character, and was awarded an Army pension which included an allowance for his youngest daughter.

MILITARY FUNERALS AT MACCLESFIELD - The remains of Pte William Herbert Bradley, Royal Defence Corps, Silk Street, Macclesfield, were interred on Sunday in the Macclesfield Cemetery. The cortege was preceded by a firing party from the Macclesfield Batt of the Ches Vol Regt under Sergt Major Harry Heath, and a combined band which en route played the Dead March in "Saul." Four soldiers acted as bearers, and the "Last Post" was sounded by Scout Albert Parker (Christ Church Troop of Boy Scouts).

William Bradley is buried at Macclesfield Cemetery, Cheshire, in grave ref. H. 6447. The Commonwealth War Graves Commission holds casualty details for Private William Bradley, and he is listed on the Imperial War Museum's Lives of the First World War website.

At the time of writing, the Commonwealth War Graves Commission has incorrectly recorded William Bradley's date of death as 14 April 1918, but this was the date of burial. The correct date of death, according to his Army Service Records, is 9 April 1918.

In Macclesfield, William Bradley is not known to be commemorated on any war memorials.