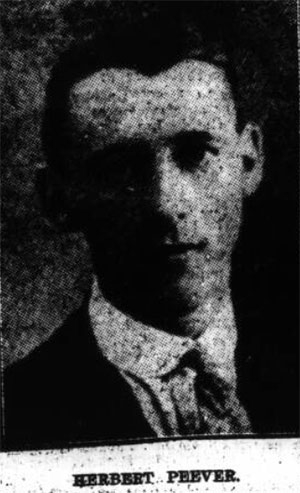 Private Herbert Peever, son of Mr. and Mrs. John Peever, is in the 1st Battalion King’s Liverpool Regiment. Private H. Peever was goalkeeper for the Northern Nomads Football Club. He was employed prior to the war in the office of Messrs. Hill and Dickinson, Liverpool. 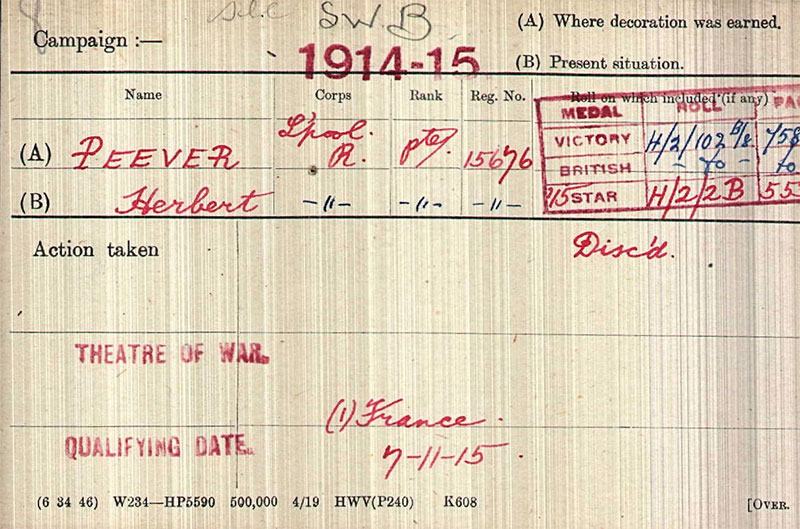 Fiver other brothers served, Lance Corproal Gerorge Peever died of dysentery in Egypt nine after the armistice, all the brothers can be found on the Roll.

These are the sons of Mrs. Peever and the late John Peever, 35 Rose Mount, Oxton.

Private Edward Peever, Cheshire Regiment, in France, once wounded. Prior to joining he was a timekeeper, Dock Board Office, Liverpool.

Third A.M. William Peever, R.F.C. in training. Prior to joining he was chief clerk to Mr. F.A. Greer, K.C., London.

Lance Corporal George Peever, South Irish Horse Regt., in Egypt. Prior to joining he was an actor in La Comedie Anglaise, Co. Ireland.

Private Herbert Peever, Kings Liverpool Regt. Is in France, prior to joining he was employed by Hill, Dickenson and Co. solicitors, Liverpool.

Wireless Operator Harry Peever, R.F.C., in France. Prior to joining he was a member of the Marconi Co.

Frederick Peever, wireless operator on H.M.T ----, was at the landing of the first troops at the Dardanelles. He is at present serving at sea.

At a sitting of the Birkenhead Military Tribunal in January 1917 a seventh son was due to be conscripted, this article appeared in the Birkenhead News, Wednesday, January 24,  1917.