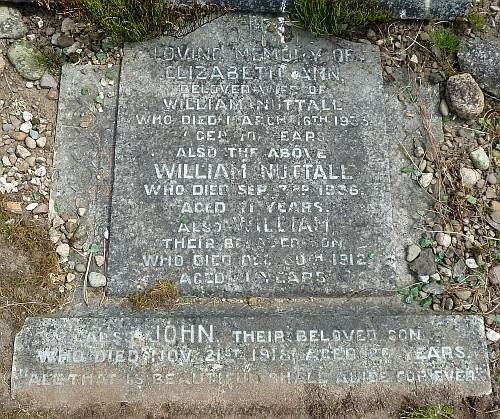 John Nuttall was born in Macclesfield on 17 October 1892, the son of Elizabeth Ann and William Nuttall, a bricklayer of Macclesfield.

John was educated first at the National School and later at Lord Street School, where he and his sisters Ellen and Eliza were added to the admission register on 15 May 1899.

John was involved with Christ Church and was a Scoutmaster and bell-ringer there. He later moved to Malmesbury in Wiltshire, working as a weaving overlooker.

John joined the local 7th Battalion of the Cheshire Regiment in Macclesfield on 10 December 1915, although he states in his service records that he was at that time living at 3 St John's Bridge, Malmesbury. He was described as being 5 feet 4 inches tall, with a 34 inch chest, grey eyes, brown hair, a dark complexion, and had tattoos of an anchor on his right forearm and three spots on his left forearm.

John was sent for training on 13 January 1916. However, it soon became apparent that he was not a well man, and he was discharged as unfit for service on 31 March 1916. John's commanding officer stated on his discharge papers: I have found him sober & honest & during the short time he has been in this Battalion his conduct has been satisfactory.

On 25 June 1917 John was medically examined again at Stockport; he was found to be anaemic and also had valvular heart disease (mitral stenosis). As a result, he was declared to be permanently unfit for military service.

John returned to Malmesbury but at some time during 1918 he fell ill with pneumonia and subsequently died in Malmesbury Cottage Hospital; it is unclear whether he died on 21st or 26th November, but his body was returned to Macclesfield and was buried in Macclesfield Cemetery on 30th November 1918. This was at a time when a great many deaths were occurring locally due to influenza - the Macclesfield Times reported on 29 November 1918 that Owing to the large number of deaths from influenza, which has necessitated an increase of the staff at the cemetery, the regulations as to the hours of interment have been suspended and ministers have agreed to take funerals daily morning and afternoon until interments become normal.

John's death was announced by his family on the back page of the Macclesfield Courier on 14 December 1918, along with an extraordinary 74 more death announcements:

The following week, the Macclesfield Courier printed a report of a memorial service held at Christ Church for two former Christ Church Scoutmasters and bell-ringers, Jack Start and John Nuttall:

... The memorial service was also held to the memory of Mr John Nuttall, another late Scoutmaster of the 3rd Macclesfield (Christ Church) Troop, who succumbed to heart failure following an attack of pneumonia. This makes three scoutmasters and two assistant scoutmasters (besides several scouts) which this Troop has lost during the great war.

John Nuttall was buried in Grave Ref. F. 4501 in Macclesfield Cemetery on 30th November 1918. The headstone includes the inscription

There is a discrepancy between the date of death printed in the newspaper and the date on the inscription.

John is listed on the Imperial War Museum’s Lives of the First World War website.

In Macclesfield, John Nuttall is commemorated on the Christ Church war memorial. Elsewhere, he is recorded in the Central Council of Church Bell-Ringers Great War Roll of Honour, held at St Paul’s Cathedral, London.