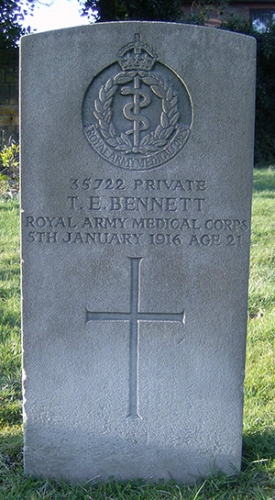 Thomas Edward Bennett was born in Rock Ferry, Birkenhead in 1894 to parents Edward and Sarah Bennett. By 1911, the family lived in Claughton Road, Birkenhead and Thomas was an engine cleaner on the railways. His occupation had changed by the beginning of the First World War as according to his Attestation papers, dated September 1914, Thomas had been a ships steward.

He was enlisted into the Royal Army Medical Corps and served on the home front from September 1914 until 15th July 1915, when Thomas was discharged from the Army, as being no longer physically fit for war service.

Sadly, Thomas died a few months later in January 1916 and he is buried in Flaybrick cemetery, Birkenhead.