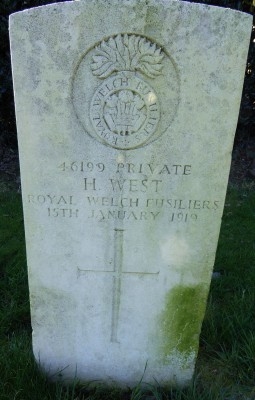 In 1901 the family was living at 22 Carter St, Chorlton, and Herbert, aged 22, was employed as a commercial clerk. Ten years later in 1911 the family had moved again to 20 Farndon Road, Reddish, Stockport and Herbert, working as a bookkeeper for a firm of engineers, was the only child still living with his parents.

Herbert attested at Stockport on 11 December 1915 and was called for service with the 12th Battalion of the Royal Welsh Fusiliers on 1 June 1916. After training at Kinmel Park, he was drafted to France on 7 October 1916 but was admitted to the 130th Field Ambulance on 18th February 1917, suffering from general paralysis. He was repatriated to England for treatment and was admitted to Netley Hospital on 26 February 1917 and transferred to Lord Derby's War Hospital, Warrington on 2 March 1917.

Private West was discharged from the army on 11th August 1917 due to being no longer physically fit for war service. His service records state that after discharge he intended to live at Innes Street, Crowcroft Park, Longsight, Manchester.

Private Herbert West is buried in grave ref. Z. 19119A in Macclesfield Cemetery. The Commonwealth War Graves Commission holds casualty details for Private Herbert West, and he is listed on the Imperial War Museum’s Lives of the First World War website.