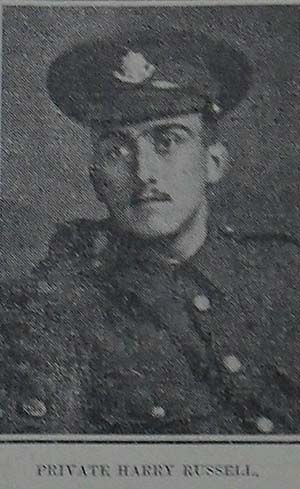 Whose death from wounds we recorded last week was the 22nd year old son of Mr. C. H. Russell, dental mechanic, of 4, Albert Road, Birkenhead. His father, who is the brother of Alderman R. J. Russell, is a member of the Birkenhead Old Age Pension Committee, and also of the Board of Management of the Birkenhead Co-operative Society. The young soldier was educated at Belmont Boys’ High School, Belfast, and at Woodchurch Road Council School, Birkenhead. Prior to the war he employed at the Great Central Railway Company’s offices in Dock Road, Seacombe, and shortly after the outbreak of hostilities he went into training with the Cheshires.

Deceased had been through all the heavy fighting in France for well nigh two years, and had been recommended for a commission. A letter from the officer commanding his company states: “Dear Mr. Russell. The whole Company mourn with you in the loss of your son, Pte. C. H. Russell. He has done great work for many months as a stretcher bearer, and his courage and reliability were a by-word with us all. He came safely through the Messines battle, and helped to win a great name for the battalion, but was unfortunately killed last week by a shell. We want more like your son, and can ill afford to lose such fine men. Will you please accept my heartfelt condolence.”