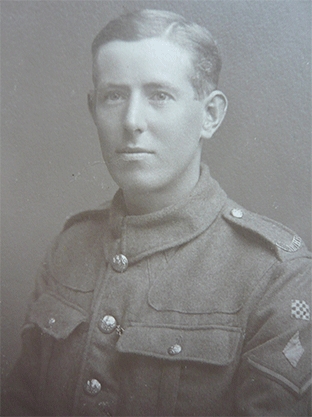 Son of Mr. James Cordon Champ and Mrs. Elizabeth Champ of 19, Nelson Street, Congleton Cheshire, and later 55, Wagg's Road, Congleton, Cheshire. He had five sisters, Sarah Ann, Gertrude, Edith, Mabel and Doris Champ, along with three brothers, James Albert, David and Leslie Champ. Prior to enlisting, he was employed as an Apprentice Shoe Trader with his father, in their Boot and Shoe business at 58, High Street, Congleton, Cheshire.
Pre-War Norman served in the Territorials with the 1/7th Battalion, the Cheshire Regiment, enlisting in 1911. In August 1914 they were based in Macclesfield part of the Cheshire Brigade, Welsh Division. They moved on mobilisation to Shrewsbury and Church Stretton and by the end of August 1914 they were in Northampton. In December 1914 they moved again this time to Cambridge and then by March 1915 they were in Bedford. They then became part of the 159th Brigade, 53rd Welsh Division. The division sailed from Devonport in July 1915, going via Alexandria to Gallipoli where it landed on the 9th August 1915. In December 1915 they were withdrawn from Gallipoli and moved to Egypt. The battalion left the division on the 31st May 1918 and moved to France.

They became under the command of the 102nd Brigade, 34th Division. On the 11th of October 1918, the Battalion took up positions in an open trench and captured German pillboxes near the village of Gheluwe, approximately 14 miles south east of Ypres. In the early hours of the 14th, whilst it was still dark, the attack began on a wide front. Following close behind a creeping artillery barrage. “A” and “C” companies lost their direction due to the gas smoke and wire, but as the morning light improved they managed to find their objective. They pressed across the Gheluwe – Menin road (now the N8 from Ieper to Kortrjik) close to the village of Menin. About 110 prisoners were captured as well as several guns. The newly captured position was consolidated and, during the evening patrols were pushed forward. 166 members of the battalion had been killed, wounded or were missing, amongst those killed was Norman.

Norman was buried close to where he fell, in 1922 when the war graves commission were creating permanent cemeteries, Norman's body was exhumed and moved to Hooge Crater.

Cheshire County Memorial Project would like to thank, Robert Champ for the pictures and letters and John and Christopher Pullen for the information on Norman.