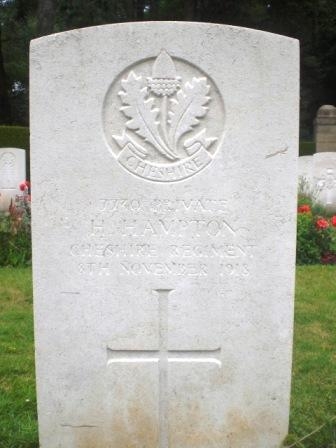 Herbert was born in Moulton Northwich 1887, his farther James worked on the Canal has a labourer, mothers name was Jane. He was one of seven children, Stephen, Agnes, Lucy & Mary all older than Herbert, followed by a younger brother and sister, Fred and Fanny.

At 14 he was employed by Edward Gibson at Rose Cottage farm, Warmingham, has a cattle man, he was also lodging with Edward.

In the June 1908 Herbert married Alice Thorley, they had a son James in September the same year and resided at 57 Middlewich Road Sandbach, Cheshire, Herbert was now working as a General Labourer.

Herbert enlisted in the Cheshire Regiment at Crewe, Cheshire, we believe in August/September 1904, not sure why since not long being married, maybe for the money.

He was recalled to his Battalion at the outbreak of the Great War and landed in France on the 16th August 1914.

He was reported missing from his Battalion on the 24th August after the action at Audregnies.

Herbert was taken prisoner and spent the rest of the war in a prison camp, November 1918 he sadly passed away at the Bramhar Camp Hopital, Bawinkle, with just 3 more days to go before the Armistice. We do not know the exact course but can assume it was the Spanish Flue that was spreading across Europe around this time and killed a lot of Soldiers.