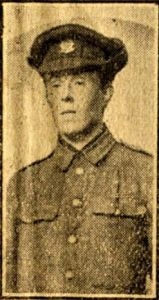 Harold Woodward was born in Macclesfield in April 1896, the only child of Annie and Walter Woodward, a silk spinner of 14 Preston Street West, Macclesfield. In 1901, four year old Harold was living at that address with his parents and cousin Joseph Potts (22), a bricklayer's labourer from Swinton, Lancashire.

Harold was educated at Crompton Road and Christ Church Schools to Standard Grade IV and in 1909, after leaving school and finding employment as an errand boy, he enrolled at Macclesfield Technical School to further his education.

By 1911 Harold was employed as a grocer's assistant by Mr Hall, a provision dealer of Park Lane.

Harold enlisted with the 1st Cheshire Regiment in February 1915 and was sent to Birkenhead for training. He was drafted to France just three months later, on 13th May 1915.

Harold's death was reported in the Macclesfield Times on 18 August 1916:

News has been received... that Private Harold Woodward, 1st Cheshire Regt., son of Mrs Woodward of 14 Preston Street West, Macclesfield, has been killed in action. The following letter has come to hand from Private Philip Hayward, a comrade of the deceased soldier: 'Your son Harold met his death doing his duty for King and Country on the night of August 1st.... I never knew that Harold was dead until the 2nd of August, a comrade informing me that your son had died instantly...

The deceased soldier was 20 years of age and received his education at the Crompton Road and Christ Church Schools. He attended Crompton Road Church. Private Woodward had been in France several months. Prior to enlisting he had been employed by Mr Hall, provision dealer. The deceased, in one of his last letters home, stated: "We are in the trenches again, for you see they cannot do without the Cheshires long. We had some very big marches for some days to get to the trenches."

His death was also reported in the Macclesfield Courier of 19 August 1916:

Mr and Mrs Woodward, of 14 Preston Street West, have received information that their son, Private Harold Woodward, was killed in action in France on August 1st last. ...Private Woodward enlisted in February, 1915, and was sent to Birkenhead, and after training there with his regiment, the 1st Cheshires, was sent out 12 weeks later to France. He was only 20 years of age, and prior to enlisting was in the employ of Mr Hall, provision dealer, Park Lane.

In Macclesfield, Private Harold Woodward is commemorated on the Park Green, Town Hall, St Michael's Church and All Saints Church war memorials and the Ancient Order of Foresters roll of honour.